#MaguGate: EFCC Staff Tell Acting Chair To Give Account For Himself, Instead Of Using Sahara Reporters To Respond To Allegations Reported In DENISAURUS

The Acting Chairman of the Economic and Financial Crimes Commission, EFCC, Ibrahim Mustafa Magu has used his US based online media ally to respond to a few of the allegations reported and published by this website.

The Editor of DENISAURUS News, Adenike Lucas, has in the past six month carried out an in-depth investigation with EFCC staffers, which revealed the appalling actions of Mr Magu, who was using dubious methods to push for his confirmation.

Anonymous sources very conversant with the operations of the EFCC have kept Nigerians up to date with Mr Magu’s action via this site.

In February of this year, a bold whistle-blower contacted this news website to report the antics of a frantically desperate, Mr Magu, who was said to be consumed with being made the substantive chair of the anti-graft commission; he was using unauthorised means to achieve this aim.

The source along with other EFCC staff who did not want to be named, gave concrete evidence of the dubious method being used by Mr Magu which includes illegally reaching out to senators, blackmailing of some highly placed personalities in the country, such as Emirs, President Muhammadu Buhari’s (PMB) appointees and others.

When all failed, the Borno state indigene began to bully staff members. The allegation of staff bullying was published by a popular blogger, Abubakar Sidiq Usman. Unfortunately, this lead to the arrest of Mr Usman. 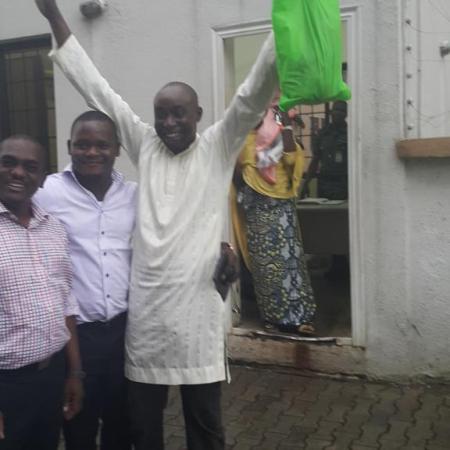 So far all advances made by Mr Magu have failed to achieve the desired result. Having realised that none of his plans would work, the EFCC leader devised a plan with his ally in the US and they both began a dirty media war against officials appointed by President Muhammadu Buhari.

The Editor of this website, has highlighted in the past and alerted on all effort made by Mr Magu of EFCC and Sahara Reporters (SR), but even the Presidency and some of PMB’s Appointees and Associates took the exposé with levity.

A staff member thinks it is the levity in which the AGF, Mamman Daura, DG DSS, Gen. Dambazau, Lt Gen Buratai et al, have responded to claims put by SR that has allowed Mr Magu of EFCC continue his misdeed.

Others commend the officials for staying silent and allowing their work speak for itself.

Insiders say, the recent article on SR shows how “the duo of Magu and SR, have gotten more boldness to peddle more lies in the media.”

Instead of providing a reply to all the allegations made against him on the site in his personal or official capacity as Acting Boss of the agency, Mr Magu – who according to staff is unable to make a coherent argument for himself- would rather prefer to request his crony and ally, Sahara Reporters to respond to the over six months EXPOSÉ on him.

A gonzo news reply by SR on behalf of Mr. Magu states that the EFCC’s current leader had “tactically decided to slow down on prosecuting high-profile corruption cases in order to advance his confirmation.”

According to SR, “Mr. Kyari and his team also discovered that both Mr. Monguno and Mr. Magu had been close friends with a former Air Force officer and a member of the Presidential Arms Panel, Air Commodore Umar Mohammed (rtd),” now DSS suspect. With this alone, SR shot themselves in the foot, thereby acknowledging the shoddy deals of Mr Magu of EFCC which was reported in this blog.

In all of this effort by Sahara Reporters on behalf of Mr Magu of EFCC, they failed to speak on the recent ‘audio exposé’ regarding their paymaster.

EFCC sources note that this is because any attempt to write in defence of Mr Magu of EFCC’s relationship and link with Mr Ibanga Akpabio will give more publicity to the revelation, and would whittle down the ‘arrest and recovery’ gimmick which Mr Magu of EFCC has been selling to gullible Nigerians and the Presidency so as to look as if he is pure and doing an effective job in the fight against corruption.

Mr Magu might be able to use SR to reply to some allegation but he would not talk about the tape, an insider stated. A source who spoke at length with Adenike Lucas about this issue said that SR does the bidding of Mr Magu.

The EFCC acting boss was left shamed face when the Chief of Staff, Alhaji Abba Kyari granted an interview to State House Media to debunk the news of his suspension.

They say SR which peddled much about the allegation of misconduct against the CoS advised the President against reacting to this sort of gutter journalism. Many were pleased when President Buhari gave an interview to Osasu Igbinedion in which he said he did not agree with the assertion made in the news about a power struggle in the Villa.

In that interview, President Buhari assured the world that he was still Nigeria’s number one citizen – not his elder nephew, Mallam Mamman Duara as SR would like people to think.

Predictably, PMB’s debunk of the allegation against Mallam Daura was not reported by SR. Those reading SR, say there hardly been an article on its website where it has not dragged the names of innocent PMB Associates into their false articles, and projecting that same people do not want Magu of EFCC to be confirmed as the substantive EFCC Chair. Invariably, this further justifies the fact that Magu of EFCC himself and Godfather, NSA Monguno are the arrow heads behind these publications by SR.

Despite many attempt to give right of reply, Wilson Uwujaren, the EFCC Spokesman has always snubbed the request for comment by DENISAURUS News. Rather they have chosen SR instead of a direct reply to allegations against the Acting Boss of the Anti-graft agency.

As a result of bullying, victimization and impunity of Magu of EFCC, senior EFCC Core Staff now tendered their RESIGNATIONS, and left the Employ of the Agency.

So far, over five Managerial Core Staff have resigned. Others say there is a need for PMB to ACT fast on the Agency’s Boss.

DENISAURUS News can reveal that some of the reasons provided by few of resignees is the fact that Mr Magu of EFCC made the Agency to call for recruitment but instead following due process in appointing new staff, Mr Magu ordered some of the List to be replaced with his “Confirmation Lobbying List.”

Also, Magu of EFCC “brought in a friend of his who is meant to be on Grade Level 10 and asked that the person be given Grade Level 15 unconditionally.”

Other reason proffered includes: “the sudden secondment of several Policemen to the EFCC, and insistence that they be pay rolled even without being budgeted for.”

To make matters worse, EFCC sources said: “Mr Magu of EFCC does not listen to the Professional Opinions of his Lieutenants heading most of the Departments, as he feels he ‘Knows All,’ yet reading a prepared speech in a conference was like hell for a Chief Executive.”

Importantly, staff have alleged several injustices perpetrated by Mr Magu, when it has to do with core EFCC staff and his colleagues from the Nigeria Police.

So desperate to be confirmed and having failed with all other plans, Mr Magu seem to have enlisted a new means to achieve his aim.

The recent and most catastrophic antics of Mr Magu is the use of a sensitive Unit in the Agency to “BUG” the phone lines of PMB’s appointees and associates, and thereafter, furnish Sahara Reporters with information to blackmail them.

Where nothing is found as in the case of the CoS Abba Kyari, DG DSS Lawal M Daura, Gen. Abdulrahman B Dambazau, Alh Mamman Daura, Lt. Gen. Tukur Y Buratai, the duo conjured their own stories and the aim was to tarnish their image to the public and to PMB himself.

Government sources say that Mr Magu is fighting perceived enemies who he believes are against his confirmation. EFCC staff collaborate this argument adding that MR Magu of EFCC realised that PMB’s Associates have known his true colour, and do not want him to keep deceiving them nor the Nigerian Populace.

A Senator who gave a bribe of N15 Million to a member of staff of the Economic and Financial Crimes Commission, EFCC in order to squash an investigation has been named, despite the best effort of the commission’s boss, Ibrahim Mustafa Magu to protect him.

A brother of another Senator was heard boasting in a leaked tape to having links with Mr Magu. Mr Magu had given assurances to Mr Akpabio, who was a Personal Assistant to his brother, Senator Godswill Akpabio.

Many believe that the anti- graft acting chairman (pictured) has been a stumbling block to the fight against corruption.

ONGOING PLANS TO EMBARRASS THE GOVERNMENT

Magu of EFCC has ordered all his “foot soldiers” heading the various offices of the Agency, to look for anything possible that can Indict PMB ministers / aides/ associates.

His reasons being that since it is obvious that he may not be given the chair of the agency, it is time to mess everyone up, to embarrass the government of PMB. That was why he made a recent comment that PMB has given him POWER to investigate ANYBODY.

The Attorney General and Minister of Justice, Abubakar Malami has been petitioned to act on the complaints and allegations against Magu of EFCC, based on S.174 of the 1999 Constitution of the Federal Republic of Nigeria.