“A perennial offender,” Ibrahim Mustafa Magu has been heading the Economic and Financial Crimes Commission, EFCC, for more than five years without the necessary confirmation needed for his position, making his stay in office illegal.

His continued stay put, though he was rejected twice by the senate – the required body needed to legalise his remain in office, has now been challenged by a legal consult and this seem to have freaked Mr Magu out, DENISAURUS News understands.

The full document for the fresh case suit no FHC/ Abj/ CS / 356/ 20, which Mr Magu refused to accept – but sources say the anti-graft boss is discussing with them privately, has been obtained and published by this paper in this report.

The document published in this report today, proves the paper’s claim that a fresh suit against Mr Magu does exist.

Mr Magu, whose promotion as Commissioner of Police was exclusively published by DENISAURUS News, before it was announced by the Police Service Commission, PCS, is so rattled by the fresh case against him, this paper can reveal.

Though Mr Magu, a man who claims to have read Accounting from the prestigious Ahmadu Bello University, ABU Zaria, knows he should not discuss matter that are pending before the court as it is sub judiced, the anti-graft boss has been openly doing so, this paper can also reveal.

Mr Magu, 58, described as a “perennial offender,” and a “liability to President Muhammadu Buhari’s corruption fight,” by an erstwhile Director-General of the Department of State Services, DSS, is being challenged because the EFCC Act 2004, which established the agency, states that “the chairman and members of the Commission other than ex-officio members shall be appointed by the President and appointment shall be subject to the confirmation of the Senate.”

The EFCC ACT 2004 also states that “the Chairman and members of the Commission other than ex-officio members shall hold office for a period of four years and may be re-appointed for a further term of four years and no more.”

Unfortunately, Mr Magu was rejected twice by the NASS Senate. He remained in acting position since his appointment in 2015, contravening the Public Service Rules, which states that he can only act in such position for six months.

Even after his appointment was first rejected in 2016, Mr Magu’s first four year tenure should have ended by now, and he should have had his name represented to the senate, however that has not been the case.

He has now been in the office on a new tenure for more than six month and has not had any written signal sent to the national assembly about his appointment.

“For purpose of acting appointment involving Public Officer, the said officer shall not hold office for a period more than Six Months,” the fresh suit which was filed on the 12th of March, 2020 further states.

DENISAURUS News, the first media and only newspaper to exclusively publish the extra charges brought against Mr Magu by the DSS, before it was read out at the NASS Senate, understand that he is still desperate about his confirmation.

The paper has consistently, since 2016 reported about how Mr Magu was scheming his way to becoming the fourth substantive chairman, which includes using marabouts and spiritualists.

The EFCC boss has also been linked to a prophet who he uses as a “conduit pipe,” for siphoning money.

Sources informed the paper that many of the assets recovered from suspects, have been re-looted by Mr Magu and his cronies.

When a popular blogger published a report first written by DENISAURUS News in August 2016, about how Mr Magu had re-looted assets including the BACAB PLAZA beside KASUPDA HOUSE, Kaduna Central Market, Ahmadu Bello Way, Kaduna State, the anti-graft boss had him arrested.

The paper understood that Mr Magu was so desperate about is confirmation then.

Mr Magu, this paper maintains is still desperate to become the chairman of the anti-graft agency.

He has made several attempts through proxies, to reach this paper and requested that factual stories are removed.

Similarly, the story which exposed the 58-year-old Commissioner of Police’s link with Prophet Omale has caused the clergy man to also reach out to the paper, stating that compensation would be made if it is pulled off the site.

Despite promising to do “the needful,” in means of “compensating” DENISAURUS News for removing the “factual stories,” the paper refuses, stating that “we are not a profit-making organisation. We are not working for compensation – whether financial or otherwise” 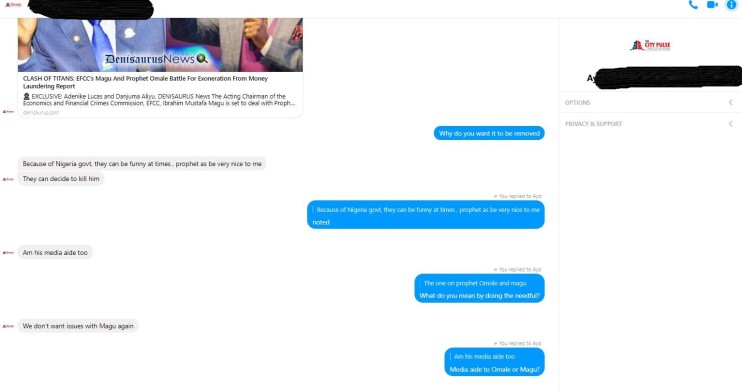 Meanwhile, Mr Magu has planned with a political group on how to improve his rating with the public, having failed to stop this media from publishing all the news of his corrupt atrocities.

The group which is based in London is to host a virtual session this Saturday March 23, 2020, with EFCC’s Magu, in order to give him a platform where he can be portrayed as a saint to the world.