Exclusive: By Staff Reporter From The Pebbles News

I believe President Muhammadu Buhari GCFR is alone in this fight against corruption. I say so with my reason stated below.

You don’t need a soothsayer to state this fact: ‘President Buhari abhors corruption with a deep passion.’

To prove this fact, one needs to look at the actions of the President over his tenure as a civilian and military leader. Many, are those who have and can attest to the honesty of President Buhari who served as military head of state and later went to serve as Petroleum Minister under President Olusegun Obasanjo.

One of the first people to be arrested for corruption in this APC-led administration was President Buhari’s brother in-law, Musa Yola.

Our Commander-in-Chief makes it known to any one that cares to listen that he would not spare any one, including his relatives if caught in any fraudulent act.

So why then are not we seeing any result in this fight against corruption? Well, the answer is simple. Too many saboteurs are working against President Buhari’s good intentions to rid our country of corruption.

It all started from the day President Buhari appointed the present Acting Chair of the Economic and Financial Crimes Commission EFCC, Ibrahim Mustafa Magu.

Mr Magu was appointed sometime in November 2015. Immediately, the acting anti-graft agency boss went round the country to pay homage to top politicians, asking for their blessings and endorsement.

One of those visited by Mr Magu was a powerful chieftain of a political party in Lagos State, South-West Nigeria.

During the meeting, Mr Magu pledged his loyalty to chieftain, a popular member of the APC BOT.

In turn, the chieftain has made it his number one priority to get Mr Magu confirmed, despite knowing about the massive covering of corrupt acts perpetuated by the Borno born Deputy Police Commissioner.

A reliable source has since revealed an astonishing fact and plans by a top government official – said to be sympathetic to Mr Magu of EFCC for being loyal to the party Chieftain, to make an agreement with the NASS Senate to shed their sword and confirm the anti-graft agency’s boss.

The plot was the outcome of a secret meeting of the top government official, together with officials of NASS Senate, during President Muhammadu Buhari’s official visit to Morocco for the COP-22 on climate change.

The same government official was the one who passed Mr Magu’s name for confirmation, despite an alarming report by the Department of State Security, when President Buhari was away for a medical trip in London.

Around July 2016, President Buhari had proceeded to the United Kingdom UK, for a Medical check-up. While away, a certain top government official who is very close to the powerful Party Chieftain, whom Mr  Magu of EFCC had paid homage, hurriedly insisted that a Senior Official in PMB’s office sends Mr Magu’s name for NASS Senate confirmation.

Even though the possible reasons for an earlier delay to send the name of Mr Magu of EFCC, was due to “intelligence report” and the “Non-Screening” by the Department of State Services DSS. It was first reported by “The Nation” Newspaper.

The honest truth is that while President Buhari really want to fight corruption, those working against him a far too many.

WHY ARE THEY PUSHING FOR MAGU?

The question now is why is the confirmation of Mr Magu of EFCC always brought up, anytime PMB steps out of Nigeria for one assignment or engagement?

Once again, I think the answer is simple! Those backing Mr Magu, see it as the perfect time when they can find others who lack the “integrity style” of President Buhari and can find solace in one another to take selfish favourable decisions that may negatively affect Nigeria later.

Truth is, during the recent meeting between the top government official and the NASS Senate officials, an agreement was reached.

Who are the parties allaying their fears and pushing for confirmation of Mr Magu of EFCC?

This people who argue that the EFCC acting boss say the anti-graft agency boss must discontinue any case against NASS members. They told him point blank that he must desist from investigate them!

Which he, Mr Magu of EFCC has agreed, and a compromise was reached that the NASS Senate would expedite actions on his confirmation.

Thus, a very cunning and deceptive Mr Magu of EFCC, who has been very desperate, would sure agree to such demands.

This was brought to the knowledge of The Pebbles News through an insider source from Mr Magu.

Also, another check by The Pebbles News revealed that, lately Sahara Reporters have sub pedal on its bashing of Senator Bukola Saraki, in order to pave way for the actualisation of this plans.

An EFCC source believes that SR has done so, so as not to give room for tarnishing of the Senate President’s name.

Now, the question is who is working against President Buhari’s government and the ruling Party? How can an anti-graft agency boss who has not been thoroughly checked by the DSS, the security agency saddled with screening of Government appointees in Nigeria, be confirmed by the Senate?

The plans of the powerful party chieftain is to ensure that Mr Magu of EFCC is confirmed, so he can assist them to go after innocent PMB’s appointees and associates, while they rubbish the President and ask Mr Magu of EFCC to do their biddings.

These persons alongside Mr Magu of EFCC see some among PMB’s appointees as standing against their access to the President (which I believe to be untrue), therefore, in Mr Magu of EFCC they found one who will help mess PMB’s name and government.

This is really quite unfortunate, to show that PMB has found himself among people who do not see his effort for this country as genuine. But a teaming Nigerians are solidly behind the President, and urged PMB to at all-time do what is needful and required, in order to gain the public trust.

An online news site, ‘DENISAURUS Breaking News Service has reported a detailed investigation and exposé on Mr Magu of EFCC.

THE PEBBLES NEWS, an independent newspaper has also carried out a clandestine investigation on ascertaining the whole charade that had been going on innocently, under the nose of PMB without his knowledge.

This media had been aware of how a New York media ally of Magu of EFCC, Sahara Reporters SR, is and have been projecting the acclaimed integrity image of the anti-graft agency boss. By so doing, SR try to disparage most PMB’s Appointees and Associates, as being the ones behind the refusal of NASS Senate to have confirmed Magu of EFCC as substantive boss of the anti-graft agency.

However, to mislead Nigerians and the public, SR went ahead to say, it is PMB’s Appointees and Associates to include; Chief of Staff Abba Kyari, DG DSS Lawal M Daura, AGF Abubakar Malami, Interior Minister Gen AB Dambazau, Alh Mamman Daura, COAS Lt Gen TY Buratai and others, that have been a stumbling block on the confirmation of Magu of EFCC as substantive Boss.

All of these were later refuted, and a Group AYLDC, and its leader Abubakar A Karga futher provided some explanations and details on certain plots and effort by certain persons to use PMB’s Appointees and Associates to discredit the President, on the ground that they are not fit to be in Aso Rock Villa. The group revealed those behind spreading the wrong impression to Nigerians, as a way of clearing the air on some misinterpretations, misinformation and misrepresentations.

To also divert the minds of Nigerians from the game being carried out by the top government official and a party chieftain, SR been a baby of all these actors, went ahead to publish a news flash sometime in October 2016, claiming that the Attorney General and Minister of Justice, Mr Abubakar Malami alongside other PMB’s Appointees and Associates, were in a plot with Senate President Dr Bukola Saraki, to reject the confirmation of Mr Magu.

In their allegation, SR impliedly says its PMB side who do not want the acting boss of the anti-graft agency to be confirmed. 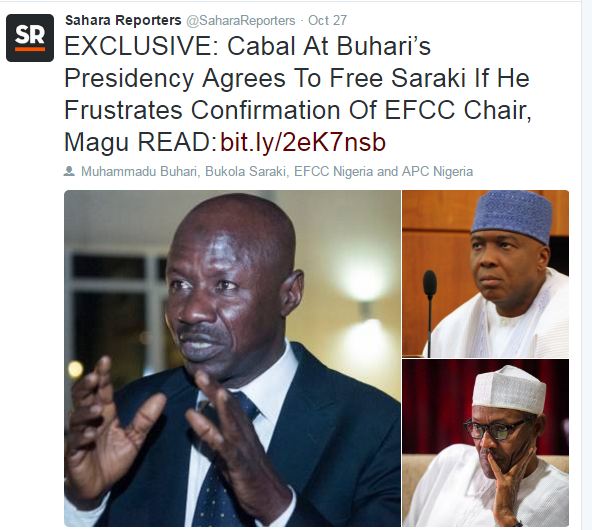 Meanwhile in the analysis and revelation, the group did not throw more light on the game playing on, regarding the issue of Mr Magu of EFCC trying to impose on everyone to get confirmed by NASS Senate. But, The Pebbles News can now authoritatively report the FACT, about all happenings so far from the July 2016 to mid-November 2016.

On Sunday, November 20, kidnappers made an attempt to abduct Alhaji Abba Kyari. On the same day, Ambassador  Bagudu Hirse was taken hostage by three gun men, from Alhaji Mamman Daura’s Kaduna residence. It remains uncertain if an attempt was  made to abduct the nephew of the President.

Over the month, Alhaji Kyari, the Chief of Staff to the President along with Alhaji Duara have been seen as the ones stalling Mr Magu’s confirmation.

Meanwhile, in another development, there have been several complaints and allegations on Mr Magu who has been bullying and victimising the EFCC core staff, owing to the anger that they are behind his failure to get confirmed.

In the recent past, there were incidence of highhandedness and frustration of EFCC managerial core staff, which to most tendering their resignations, as reported by DENISAURUS News.

This was also reported and corroborated by Daily Trust print media in its Sunday Edition of November 13, 2016.

The Pebbles News has gathered that Mr Magu had ensured that he compromised some EFCC staff, who in turn will continue to help him deny all allegations against him in the public domain.

By doing so, only those who have benefited from the “injustice and impunity” of Mr Magu would continue to defend his illegalities in the event President Buhari calls for an account on his stewardship.

Also gathered, is that, Mr Magu of EFCC had concluded plans, to deal with those EFCC Managerial Core Staff, whom he felt had exposed his cruelty and impunity to the world.

Mr Magu plans to execute this plan as soon as he is confirmed as substantive EFCC boss.

Even though, it was the same Mr Magu of EFCC who had sent delegates to plead with one of the hardworking, dedicated and influential among the resignees to return to work.

Mr Magu’s reasons for the plea was simple, he fears that being influential, the case of this resignee might spring the hope and rescue of EFCC  core staff, which would have made the public and Presidency to confirm all allegations against the acting boss of the anti-graft agency.