The Economic and Financial Crimes Commission, EFCC has confirmed that twenty police officers have been “deseconded” from the agency, following the suspension of a Commissioner of Police, Ibrahim Mustafa Magu, who is being investigated for fraud.

In the last couple of weeks, there has been countless report of how Mr Magu failed to account for billions of ₦aira and assets.

Mr Magu, 58, who touted different sum of amount to the media, was not able to account for discrepancies when giving account.

DENISAURUS News reported in 2016, that Mr Magu was fraudulently enriching himself from proceed gained from suspects – including the dodgy negotiation of the assets seized from them. 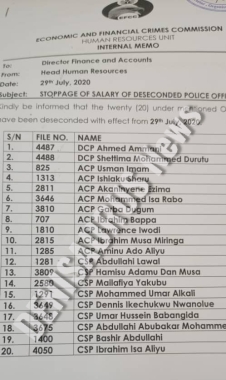 This allegation was corroborated by the Department of State Service, DSS, who say Mr Magu is a “liability” to the corruption fight. The 58-year-old Commissioner of Police, whose promotion was first reported by this paper was also indicted by the secret police for using fronts to obtain money from Politically Exposed Persons, PEP.

Sources in the Commission say the fronts are known as the “Magu Boys.”

An insider said that “Magu boys were collecting kick-backs on behalf of their boss. It was well known that for instance ACP Ishaku Sharu was a corrupt officer, but Mr Magu refused to do anything about him, as he was remitting some of the money, he was gaining to him.”

In 2016, sources also told DENISAURUS News that Mr Sharu, then a Chief Superintendent, is very corrupt. They say it is why  former Chairman Madam Farida Waziri returned him back to the mother organisation Nigeria Police,  but Ibrahim Lamorde, a sacked chairman, who is believed to have encouraged corrupt police officers, brought him back to EFCC in 2011.⁠⁠⁠⁠

CSP Sharu, while working with Mr Magu,  is thought to have cut a deal with a suspect (Mr Yushau) not to reveal an add valuable asset – BACAB PLAZA beside KASUPDA HOUSE, Kaduna Central Market, Ahmadu Bello Way, Kaduna State, into the asset list.

Some of these lackeys working for Mr Magu, who remains suspended following a letter to the President Muhammadu Buhari, from the Attorney General of the Federation, Abubakar Malami, have now been “desconded.”

A memo DENISAURUS News obtained exclusively showing the names of the officers who were returned to the Nigerian Police says from the 29th July 2020, their salary will be stopped.

Many other corrupt activities perpetuated by Mr Magu were published by this paper even before now.

In April, DENISAURUS News reported that Mr Magu,  dubbed a “perennial offender,” was using a prominent Abuja based pastor as a conduit.

At the time the Kogi-born clergy man and Mr Magu sent emissaries to plead and try to bribe DENISAURUS News so that the story to be removed.  The paper has promised to fight corruption not for monetary gain and refused to remove the stories.

“I am begging that the story on the EFCC with Omale,” one journalist working for Priphet Omale stated.

“I am a journalist as well and as I said earlier, I have no fault with the story,” he further stated, while he continued to plead “help,” on removing the story which he acknowledged to be “authentic.”

But, when asked that since you have no fault in the story, why do you want it off, he said: “in media engagement, like media laundering, this kind of story is very damaging to the pastor.”