Juliet Ibekaku, a former director of the Nigeria Financial Intelligence Unit, NFIU is among the 100-women selected to campaign for President Muhammadu Buhari’s re-election.

Barrister Ibekaku, Special Assistant to the President on Justice Reform, who is contesting for the Senatorial seat of Enugu West zone under the platform of the All Progressives Congress, would work for President Buhari’s campaign as Deputy. Nat. Coordinator – South.

Her appointment and that of 99 other women which was made known by Suleiman Haruna, a media aide to Aisha, the wife of President Buhari, is separate to the Presidential Campaign Council announced by the presidency last week.

According to Mr Haruna, the wife of the Vice President, Oludolapo Osinbajo would co-chair the new “Women and Youth Presidential Campaign Team.”

He stated that the team which will be inaugurated at the State House Conference Center on Thursday at 2.00PM, was constituted to support the re-election of President Muhammadu Buhari and Vice President Yemi Osinbajo in 2019. 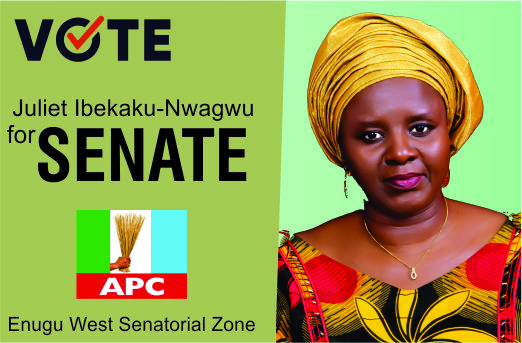