Informed sources say Asiwaju Tinubu is not happy with the current Governor, Akinwumi Ambode who he helped into office in 2015.

The two prominent politicians have tried to play down the rumours about their clash.

Yesterday, Governor Ambode picked up the 22 million naira Expression of Interest and Nomination Form to fight for re-election, despite the rift with his god-father.

READ ALSO : EXPOSED : How @AsiwajuTinubu And Protégé Bankrupted Lagos And Nigeria Since 2002 With Money Laundering

“In these three and a half years as your governor, I have seen visible proof that we can achieve unbelievable things when we all come together with no more than our belief in our dreams,” he said while announcing his plans for re-election.

“We achieved because you believed. But there is still a lot more to be done. But I am not daunted. I am not tired. And I am sure you feel the same way because we all envision a better Lagos, a Lagos of our dreams.

“So, I humbly call you again, to give me your support as I seek to continue with your mandate to steer the affairs of our state. I ask you to believe again and together, let’s achieve more.”

On the same day, Mr Sanwoolu, a former commissioner of Budget and Planning also picked up the APC form to run for the office of Governor in Lagos State.

Although many state Governors are not in support, the APC leadership have made a call for direct primaries. Some are in favour of picking a consensus candidate.

DENISAURUS News understands that Mr Sanwoolu has the backing of Asiwaju Tinubu and those close to the former Lagos Governor and Senator have endorsed him instead of Governor Ambode.

Right now, this paper understands that Governor Ambode has been told to back down his campaign or risk being impeached by the State House of Assembly, which is presided by Mudashiru Obasa, a fierce loyalist of Asiwaju Tinubu aka Jagaban.

Other loyalist of the 66-year-old Jagaban of Borgu as he is commonly referred to includes the Vice President, Yemi Osinbajo. 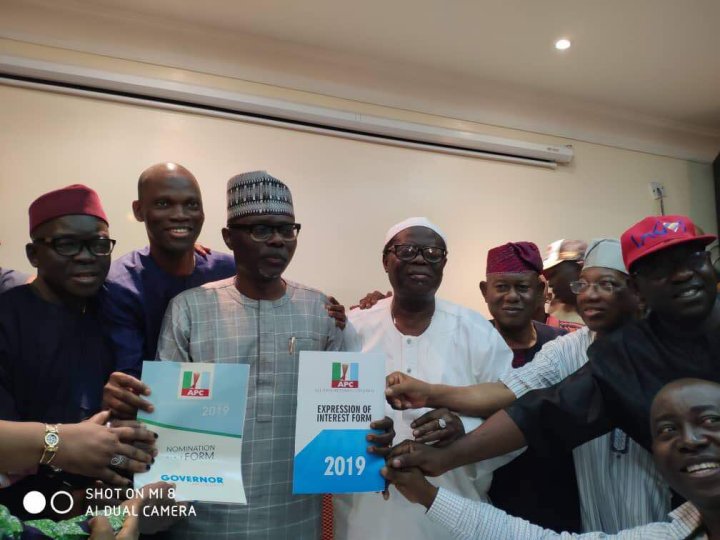 Meeting is over. Seems like Ambode is out as all 57 LGA and LCDA Chairmen have signed and endorsed Jide Sanyaolu Sanwoolu as the APC governorship flag bearer of Lagos.

Who bought Jide Sanwoolu’s APC nomination form?Why did Osinbajo spend 5 hours with Tinubu?Who did the State House of Assembly give ultimatum?Who is discussing with ADC for ticket?Why are workers in Alausa in a jubilant mood today?Who did the entire LG Chairmen in Lagos endorse?