A powerful chieftain of the ruling party has been accused of money laundering, tax evasion and corruption to the tune of up to N150 billion Naira.

Dapo Apara said Bola Tinubu, owner of Alpha Beta, a tax consultancy firm which has been collecting Internally Generated Revenue, IGR for Lagos State since 2002, has generated billions but has avoided paying tax.

However, he said looking at the website of Alphabeta; they try to “paint a different picture.”

The company has so far refused to comment on the allegation made by Mr Apara, despite many calls to their official telephone line – 0708 011 2233.

In a telephone conversation with DENISAURUS News, Mr Apara an Accountant and computer specialist revealed that he has 30 percent shares in Alphabeta, the company he is blowing the whistle on.

He said the company has generated “about N1.5 trillion (yes trillion) excluding FAAC loans and has made N150 billion in fees.”

Despite its high IGR, Lagos state has the highest domestic debt among all 36 states. The state, which was once governed by Asiwaju Tinubu also has the highest foreign debt.

Mr Apara, Managing Director/Chief Executive Officer of the tax consultancy firm said he has written “a petition to Economic and Financial Crimes Commission, EFCC that my company is being used for high level money laundering, tax evasion, and bribery of government officials.” #InvestigateAphaBeta.

He said: “N1.5 trillion (yes trillion) excluding FAAC loans has been generated in Lagos. From this, @AlphaBetaLLP has earned about N150 billion in fees.

“My petition alleges that the bulk of this amount has been laundered to evade taxes and to bribe government officials. Fortunately all is documented through the banking system including the fake loans.” 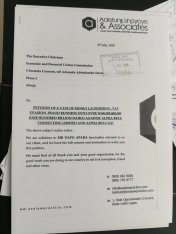 He adds: “At the same time, as a 30% shareholder, my share of profits (about N45 billion) has also been stolen and laundered by  #TundeBadejo of Soft Alliance and #AkinDoherty former commissioner of finance in @LasgoOfficial now masquerading as MD of @AlphaBetaLLP

“When I confronted them internally, the response I got was ‘Dapo, no one will believe you. We CONTROL everything – the PRESS, the COURTS, EFCC. You will only be endangering your LIFE.'”

“My part is to blow the whistle on this rampant and blatant corruption, and ask for the support of Nigerians to prevail on @officialEFCC to investigate my petition. This is a test of our leaders who constantly preach anti-corruption to walk the talk.”

A statement by Mr Apara’s lawyer, Adetunji Adegboyega submitted to the anti-graft agency on July 6 also states that “over the years the company is being protected and shielded by some powerful politicians and people in the society which made them to always boast of being untouchable, but our client, feeling the need not to keep quiet again and strengthened by his belief in the fact that the government of President Muhammadu Buhari is keen on fighting corruption, which has been the bane of our country, is of the firm belief that it’s time to expose and open the can of worms called ALPHABETA CONSULTING.

“Our client is of the firm belief that it is time for the commission to step in and conduct a holistic investigation into the activities of ALPHABETA CONSULTING LIMITED AND ALPHABETA LLP, with a view to uncovering the massive corruption, money laundering, tax evasion etc, going on in the company. Kindly note that one of the companies being used to perpetrate money laundering by the company is still another company named Ocean Trust Limited.

“The only hope of our client and indeed the teeming Nigerians who are victims of the crimes being perpetrated by these companies, in seeking justice is the commission (EFCC), which we strongly believe in and therefore call on the commission to cause a holistic investigation into this case and all involved with the aim of bringing these criminals to justice, and not allow their claims of being untouchable to be validated.

“Kindly note sir that as our client is willing and able to provide information to substantiate the claims, though, we will plead for these to be done through us as he is presently fearing for his life having been receiving death threats from a lot of quarters because of this case.”

The EFCC led by Ibrahim Mustafa Magu received the petition on July 11, this paper understands.

One thought on “EXPOSED: How @AsiwajuTinubu And Protégé Bankrupted Lagos And Nigeria Since 2002 With Money Laundering”