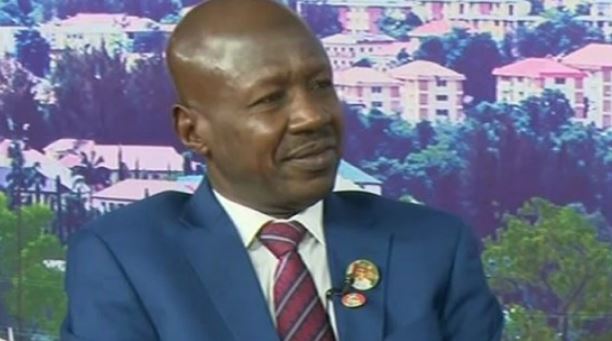 Ibrahim Mustafa Magu has taken a decision to disband a critical unit in the Economic and Financial Crimes Commission, EFCC conducting an investigation on properties illegally acquired by a party chieftain, DENISAURUS News has been informed.

This paper was informed by a reliable source that the Vice President, Yemi Osinbajo made one call to Mr Magu asking him to stop the investigation into his benefactor, a chieftain of the All Progressives Congress in Lagos.

According to our reliable source, a Unit at the EFCC had stumbled on several links of corruption, perpetrated by the said Party Chieftain around the country.

In an effort to drag-net the illicit activities of the Party Chieftain, Pastor Professor Senior Advocate of Nigeria, Yemi Osinbajo alerted EFCC’s Magu, revealed our source.

DENISAURUS News gathered from our source that, before ‘jack robbinson’, the “anti-graft boss summoned every Operative in the unit, alleging that they want to rubbish him due to attempt to investigate the party chieftain who has prevailed on President Muhammadu Buhari, PMB, to avoid him being sacked.”

Unfortunately, as we speak, EFCC’s Magu has disbanded the entire Unit at the anti-graft agency, and thereafter “maliciously removed all Operatives to other Zonal Offices.”

In his discharge of duties, the “corrupt” Borno Police Officer, who is scheduled to commence a Senior Executive Course at the National Institute of Policy and Strategic Studies in August 2018, has been accused of deliberately targeting members of the opposition, and has neglected members of the Cabal close to Party Chieftain who were accused of corruption, the paper further gathered.

The targeting of opposition is to tarnish their image and prevent any credible alternatives to President Buhari, who Mr Magu was seen wearing his re-election lapel badge.

Several calls have been made for the sack of the EFCC boss, over his brazen attack and use of power against perceived enemies of President Buhari’s government, in addition to bullying and victimisation of Staff Members.

A recent call was made by the Governor of Rivers State, Nyesome Wike, after the Benue and Akwa Ibom Governors Account were closed by the EFCC.

The Governor, a top figure in the opposition Peoples Democratic Party, PDP recognised that the said state accounts were closed because the Governors were not aligned with the ruling All Progressives Congress.

“I am calling for the sack of the Acting Chairman of the EFCC, Mr Ibrahim Magu for overthrowing a tier government,” he said.

Governor Wike added: “The mere fact that the two accounts have been re-opened does not mean that a crime was not committed.”

READ ALSO : REVEALED | 2019 POLITICS : How Top Government Official And Magu Of EFCC et al Are Scheming For A Party Chieftain

Mr Magu, who was recently promoted as a Commissioner of Police, has been full with controversies.

DENISAURUS News exclusively reported his promotion in April 2018, before it was later confirmed by the Police Service Commission.

This paper was also the first to exclusively report Nigeria’s suspension from the Egmont Group, a case that was caused by Mr Magu’s deliberate leak of confidential information.

Since the report was published in May 2017, the Senate led by Bukola Saraki has passed a mandatory bill to make the Nigerian Financial Intelligence Unit independent as required by the financial group based in Toronto.

But, despite becoming a liability to the corruption fight as predicted by the Department of State Service, Mr Magu remains in office due to an unholy alliance with Prof Osinbajo.

The 54-year-old remains at the EFCC, even though his nomination as substantive chairman was rejected by the Senate following an indictment from the Department of State Services, DSS.

EFCC’s Magu described by the secret police as “perennial offender,” has being able to stay put at the anti-graft agency even though he was rejected twice by the lawmakers mandated to screen nominees from the Executive arm of goverment.

Mr Magu was so desperate to become the chief executive of the EFCC, but unfortunately, his nomination was rejected on December 16, 2016 and March 15, 2017 by the National Assembly, following an indicting report from the DSS, which corroborates many of the allegation reported to this paper by staff of the Commission.

DENISAURUS News had exclusively reported many of the desperate moves Mr Magu has made in order to achieve his aim.

Of recent, there has been desperation to secure the conviction of PEPs. This paper understands that substantial number of judges in Lagos and other States in Nigeria are under the payroll of the said Party Chieftain who is determined to keep Mr Magu in office.

The judges are known to meet with the party chieftain, whom they refer to as “neigbhour,” and he offers them from N10 – N15 million each time they visited him in his home in Bourdillon, Ikoyi.

Today, most Nigerians may wonder why virtually all cases and accused persons claim to have been charged or convicted, are now being acquitted or discharged by Courts of appellate jurisdiction. i.e. case against Professor Olusola Oyewole, Senator Adeseye Ogunlewe, Justice Sylvester Ngwuta and that of the ex-NIMASA D-G, Patrick Akpobolokemi were dismissed.

Delivering a lead judgment in a three-judge panel, Yargatta Nimpar, said they unanimously upheld the no-case submission filed by Mr Akpolokemi in response to the criminal charges.

The simple reason for quashing of cases filed by Magu’s EFCC, is on the fact that from the very onset, the foundation for prosecution was tele-guided by the Party chieftain, who had compromised some judges in favour of anti-graft boss’ “image-laundering.

According to our source familiar with the matter, the EFCC boss also has some document which is being used to blackmail certain judges. These judges are then directed to provide favourable judgement for in favour of the EFCC.

In the long run, the cases are usually upturned at the appellate or Supreme Court.

One thought on “REVEALED: One Phone Call From @ProfOsinbajo And EFCC’s MAGU Disbanded A Unit Investigating Party Chieftain “NEIGHBOUR””