Nigeria’s senior lawmakers today, placed an embargo on the confirmation of nominees from the Presidency until the acting Chairman of the Economic and Financial Crimes Commission, EFCC, Ibrahim Mustafa Magu, is removed from office.

The Senate rejected the nomination of Mr Magu in March, following a damming report from the state security services. Following his continued stay in office, a resolution was passed in the red chamber this afternoon, for Nigerians to ignore any invitation from the “corrupt” Borno born police officer.

The Vice President, Professor Yemi Osinbajo, who is stepping in for President Muhammadu Buhari at the moment, is a staunch ally of Mr Magu. The Department of State Services, DSS report exposed Mr Magu as a corrupt officer.

The security outfit went on to describe Mr Magu as a liability to the fight against corruption and one who would continue to exploit his official position, if confirmed as EFCC chairman.

A former Deputy Inspector General of Police, DIG, Parry B. O. Osayande, rtd, also described Mr Magu as a “thoroughly’” corrupt police officer who cannot be trusted with either power or money.

Similary, the editor of this website, Adenike Lucas has been privileged to give an explosive account provided by core staff of the EFCC, showing the corruption carried out by their boss, Mr Magu in his desperate act to be confirmed as the substantive chairman of the commission.

DENISAURUS News, was the first media organisation to raise an awareness of the intel report against Mr Magu.

Reporters from this website, who received concrete information about the DSS data from August 2016,  led an intense campaign in order to bring the content of the report to the attention of the public and Senate.

READ ALSO : How Magu Of EFCC Was Caught Pant-Down At NIC Over Illegal Dismissal of Staff

While the Senate has requested for the EFCC chairman to be replaced, Prof Osinbajo remains in support of the corrupt police officer and has said that the Senate doesn’t have the power to confirm nominees.

In an interview, Prof Osinbajo, claimed that Mr Magu did not require to be screened by the Senate for him to head the agency – an opinion that has since been discredited by many Senior Advocates in Nigeria.

A request of confirmation of appointment of Lanre Gbajabiamila as Director General of National Lottery Commission will not be looked at, until the Vice President retracts those words. 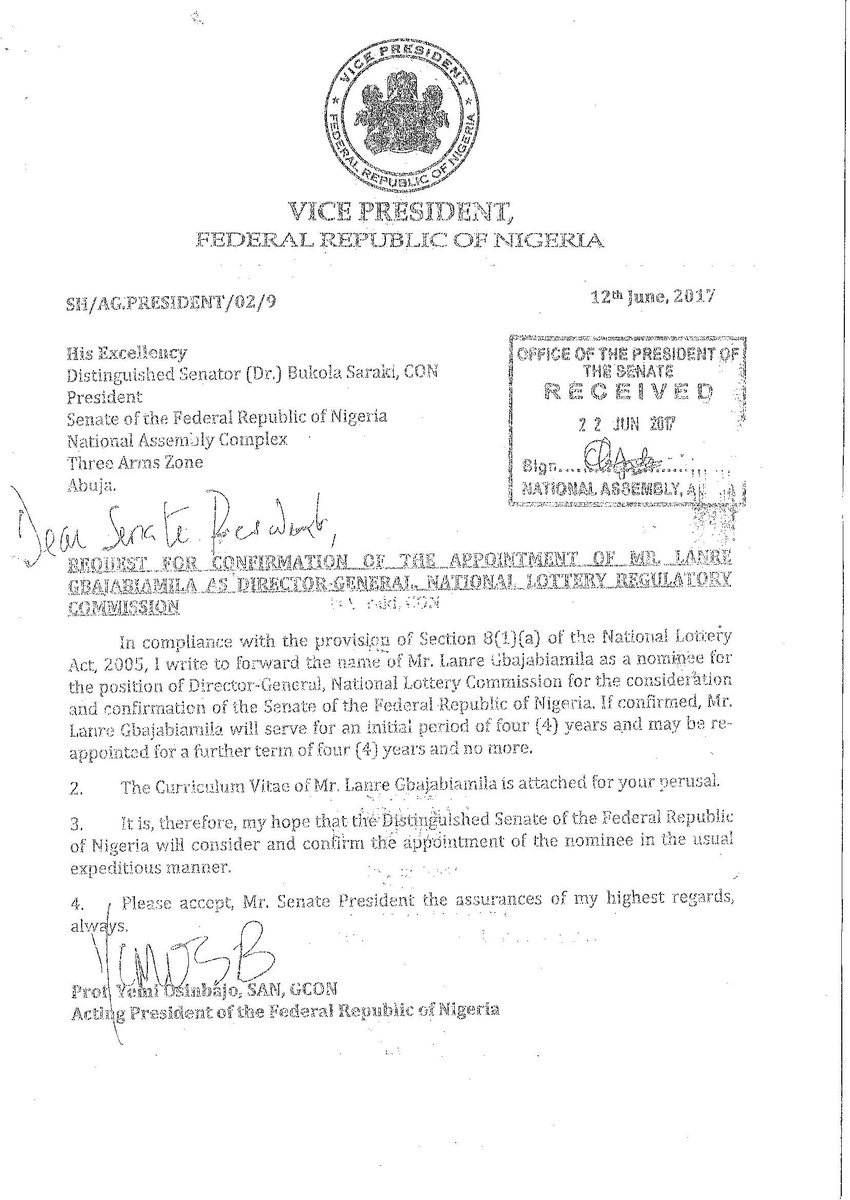 Senator Ahmed Sani Yerima, APC, Zamfara West raised a point of order in the Upper Chamber about Prof Osinbajo’s comments. He said that the issue of the power to confirm any nominee must be resolved now.

Senator @SenMarafaKabir added an additional prayer stating that the Ag.President must withdraw his statement saying the Senate doesn’t have the power to confirm nominees.

Speaking on the issue, the President of the Senate, Bukola Saraki, said the Senate will take “appropriate action” if Osinbajo failed to do the needful, a term that has been read to mean impeachment.

Senator Saraki said: “This resolution must be adhered to by the Acting President, otherwise we will be taking the appropriate action.”