Thousands of police officers from across England and Wales are expected to line the streets to honour the sacrifice of a colleague who was murdered in the Westminster terror attack.

PC Keith Palmer was stabbed to death by Khalid Masood as he stood guard at the Palace of Westminster.

Before stabbing the officer, Masood drove a car at high speed into pedestrians on Westminster Bridge, killing four people. He was later shot dead by one of PC Palmer’s colleagues.

The Queen granted special permission for the body of the 48-year-old to be laid in in rest within the Chapel of St Mary Undercroft, within the Palace of Westminster.

A full police service funeral will be held at Southwark Cathedral later this afternoon (14:00hrs ).

Earlier today, Gareth Browning  and PC Palmer’s name were added to the National Police Memorial. The roll of honour helps to remember police officer who die in active duty.

In a verified tweet, Metropolitan Police‏, @metpoliceuk said that it was doing to honour the officer by flying both flags at half-mast.

“A number of roads are closed around Parliament Sq, London Bridge & Southwark today for the funeral of PC Keith Palmer #PCKeithPalmerRIP 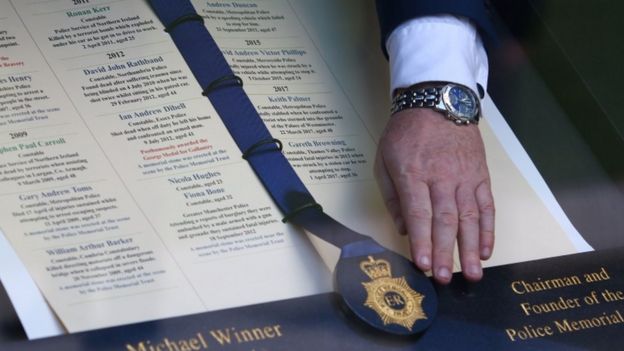