The All Progressives Congress in the United Kingdom, APC UK has confirmed that there is no ongoing protest taking place at the Nigerian High Commission in London.

The Editor of DENISAURUS NEWS, a member of the APC UK, who was in Trafalgar square sent in a video to douse the tension that followed several false report from Nigerian media houses about a protest at the country’s consular in London.

A chieftain of the party in the UK, Ade Omole confirmed that he had spoken “with one of the Senior Embassy Ministers and I was made to understand that there has been no disruption in the embassy.

“Work is going on as normal. There has been no protest or rally at the Commission today”.

Before backing out, Innocent Ujah Idibia, popularly known has Tuface or 2Baba, was accused of planing  a ‘sponsored’ nationwide protest against President Buhari.

The African Queen crooner who is said to have received “2 SUVs” from the former Governor of Akwa Ibom, Senator Godswill Akpabio, informed fans via Instagram he had decided to cancel the protest, last night.

But a leading member of the country’s opposition, Deji Adeyanju stated that the march will go ahead.

Protest planned to hold in Abuja, and Lagos were marred by low turnout. Famous entertainers slatted to attend such as Olamide, Burna Boy, Davido all failed to turn up at the rally.

Meanwhile many Nigerians have taken to various social media platform to welcome and express their delight at their President.

Abdulmumin Jibrin ‏@AbdulAbmJ, former Chairman of the House Committee on Finance prayed that “the Almighty God grant him (PMB) the strength, good health and wisdom to lead Nigeria out of our current challenges..”

President Muhammadu Buhari, PMB, today, wrote to the National Assembly to inform lawmakers of his wish to extend his vacation.

PMB as he is fondly known, was expected to arrive in Abuja today, after spending a few days away on holiday in the United Kingdom, but a Presidential spokesman, said, the President was awaiting “the results of a series of tests recommended by his doctors.”

Nigeria’s Commander in chief, who left Nigeria on Thursday 19 January on a 10-days vacation in London was to arrive back in Abuja today. 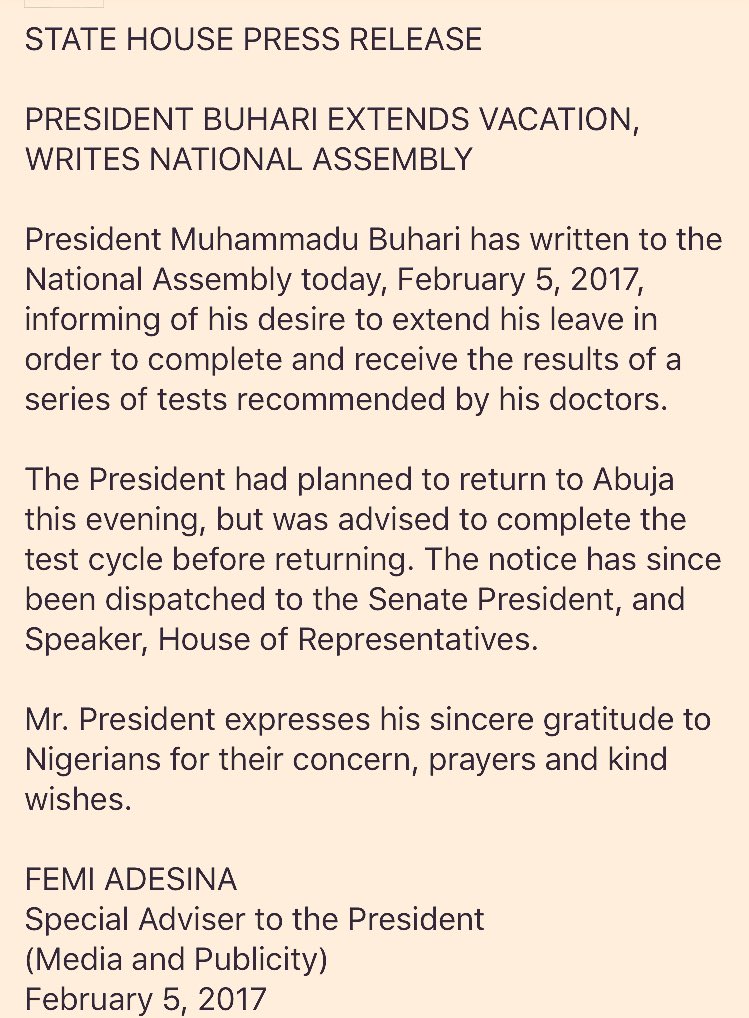 Fake media houses were created by unknown people to speculate the death of President Buhari.

However, close friends of the President have constantly reassured Nigerians that all is well.old DENISAURUS NEWS that the 73-year-old defied death wishes made on him by enemies, and will resume to work tomorrow.