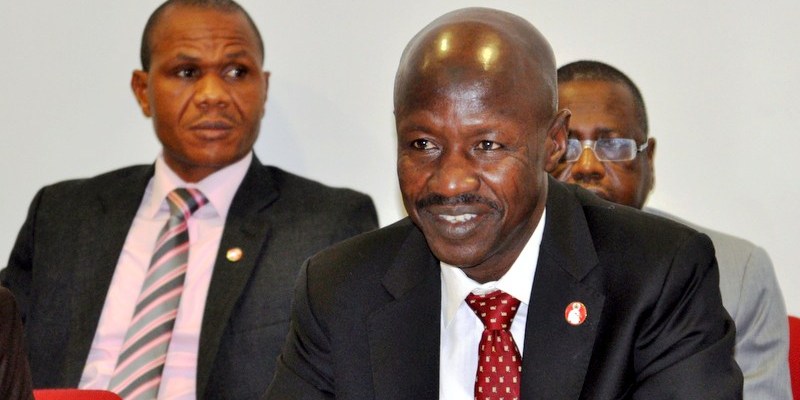 On Thursday, 15, December, 2016, the Senate rejected the nomination of Ibrahim Mustafa Magu as the chair of the Economic and Financial Crimes Commission, EFCC based on an intelligent report it received from the Department of State Security, DSS.

The DSS report indicates that the ‘rejected’ EFCC boss had failed its integrity test and “would become a liability to the anti-corruption crusade of the present administration if confirmed.”

This indictment should have been enough reason for Mr Magu to be prosecuted, but as a nation we thought we needed more.  Fortunately, the editor of DENISAURUS News has published a series of report based on various interviews conducted with EFCC staff which exposes the corruption perpetuated by Mr Magu.

DENISAURUS News took the decision to stand by EFCC staffers and has published many of the complaint made about their boss.

On August, 8, 2016, a popular blogger, Abubakar AbuSidiqu Usman who has supported EFCC staff just like this website, was arrested for publishing a piece written by our editor.

What staff accused Mr Magu of where later confirmed in the DSS report. So why is he still allowed to head the anti-graft Commission?

It is worth noting that since Mr Magu has been running the Commission, he has not secured any conviction of any politically exposed person.

And despite the media trials by Mr Magu, Nigeria still ranks high among the corrupt countries in the world.

This goes to show that Mr Magu is really not the right man for this crucial role. Not only has he been indicted by the DSS report, many staff have also complained that he ‘lacks the decorum and competence to lead it.’

We must learn from our past, or from other nations of the world that have made mistakes in the past.

Taking an intelligence report from a National Security Agency of Nigeria, DSS on vital national issues for granted, is synonymous to putting the country on “auto-pilot”.

If we do not have absolute trust and believe in the judgement and information from DSS, then the DG of the secret police should not have been appointed.

Despite the DSS and AGF reports on Mr Magu of EFCC, a top government official and the Chairman of the Presidential Advisory Committee Against Corruption, PACAC Prof Itse Sagay, say they have carried out an independent investigation which absolved Mr Magu of all faults.

An insider notified DENISAURUS News that the Top Government official and Professor Sagay, both told President Buhari that the allegations against Mr Magu of EFCC, was not true.

However, we accepted the “Intell” from the DSS on the clampdown on corrupt Judges.

Then why the selectiveness, as it relates to Mr Magu of EFCC? Is Mr Magu more righteous than the Judges who used their office for the same self-aggrandizement.

The answer is NO! If the two Professors of Law / SANs feel they have a superior idea than the Attorney-General and Minister of Justice, that is in their own right. Because they both have a “practical and theoretical” moral judgement, to assume they know more than the AGF.

Thus, when it comes to “intelligence and security” issues, we expect that the DSS to be given due respect and consideration.

Due to the fact that, as regard such field they have their own right. You will agree, that sometime in 2001, this happened in the United States of America- “If American President, George W. Bush, then had listened to the FBI report, 9/11 disaster would have been averted”.

Therefore, on this note, we must as a matter of fact admit and assimilate the decisions of both the DSS and NASS Senate on the  “Rejection of Mr Magu of EFCC” having failed an integrity test. Otherwise, Nigerians should forget the “Arrest and Recovery” gimmicks, and await a disaster waiting to explode, if the ‘double-faced’ anti-graft agency’s tsar is given the shot.