A former governor of the Central Bank of Nigeria, Sanusi Lamido Sanusi is currently in Kaduna to visit the state governor.

Mr Sanusi, 59, who is said to have arrived at the Kaduna Airport this morning, had his usual turban and was dressed in one of his stunning robs.

The 59-year-old served as CBN governor from 2009 – 2014, and was suspended by President Goodluck Jonathan after raising the alarm on the US$20 billion NNPC scandal. 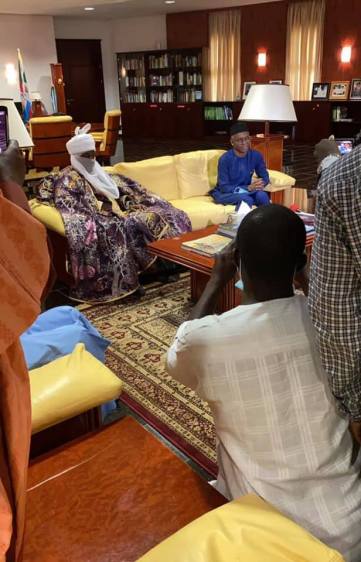 Following his suspension from the CBN, he was enthroned as the 11th emir of Kano.

However, after refusing to endorse the second term bid of  Governor Abdullahi Ganduje, Mr Sanusi was deposed from the throne- just like his own father.

Mr Sanusi, popularly known as SLS, was banished to Nasarawa. But was able to fly to Lagos where he was meet by his friend, Nasir El-Rufai, the governor of Kaduna.

Both Mr Sanusi and Governor El-Rufai were seen talking, but DENISAURUS News is not sure what they discussed today.

Governor Ganduje was caught on camera stuffing dollars in his babariga.

But the Kano Governor remains in office.