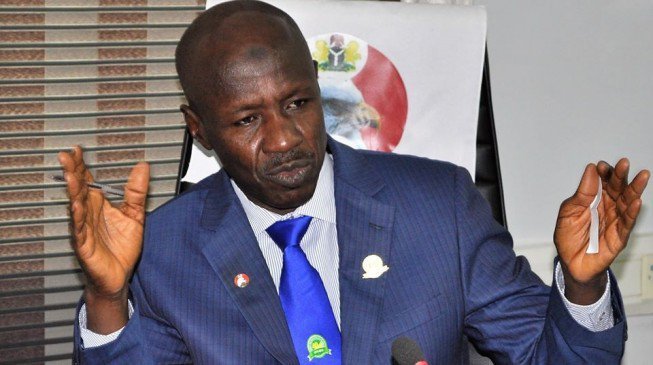 The US Government is holding discussion on how to stop further repatriation of monies shored abroad by corrupt politicians from Nigeria, following several warnings about Ibrahim Mustafa Magu of the Economic and Financial Crimes Commission, EFCC, DENISAURUS News can disclose.

DENISAURUS News has learned that a high ranking US-Republican Senator, accused Mr Magu, of oppressing political opponents, hence monies stored in the US by Sani Abacha, a late former Nigerian Military Head of State and other corrupt politicians, will no longer be released to the Nigeria.

Charles Grassley, a Senator, was so enraged by the violation of rights discharged by Mr Magu, who was twice rejected by the NASS Senate, due to an indicting report from the Department of State Services, DSS.

Senator Grassley a high ranking lawmaker in the US was so irked by the actions of Mr Magu, the acting chairman of the EFCC, he made contrite effort to block the release of the recent entrenchment of $320 million Abacha loot released to the country last month.

Pledges have been made to stop the repatriation of other monies shored abroad by corrupt Nigerian politicians due to the same reasons.

It is not the first time issues of abuse, victimisation, bullying has been raised about Mr Magu, 58, who has been in acting position for over 5 years, contrary to the Public Service Rules, which states that public servants can only act for six month.

Process & Industrial Developments (P&ID) established by two Irish nationals, has been given a nine billion dollars judgement  against Nigeria, and it accused Mr Magu of not following due process.

Nigeria, under the leadership of President Muhammadu Buhari can not afford the debt and has to seek for a loan in order to pay this money.

“None of the individuals involved are current employees or representatives of P&ID,” the spokesman said.

“P&ID itself has received no communication from any Nigerian authority about the investigation or today’s hearing. There has been no evidence produced, no defense allowed, no charges laid, no due process followed.”

Over hundred staff members of the anti-graft agency have constantly spoken out about their boss and how he is very vindictive.

Mr Magu even suspended staff members without due course, and refused to pay them salary for more than five years.

DENISAURUS News, has constantly stood in support with this staff members and promises to continue to do so.

Mr Magu, who the secret police described as a “perennial offender,” and a “liability to the corruption fight” has been in the agency without a confirmation. This has meant that there is no board of executive.

The corrupt acting chairman was recently linked to a clergy man who he uses to siphon money.

Calls has been made for Prophet Emmanuel Omale, the lead founder of the church in Abuja, and Mr Magu, dubbed a “perennial offender,” to be investigated by the Federal Government.

Both men have sent emissaries to the paper to plead for the “factual stories” to be removed, but DENISAURUS News refuses to remove the news, stating that it was working in line with the President’s corruption fight.