A member of the House of Representatives representing Kware/Wamakko has died after a brief illness.

Abdullahi Muhammad Wamakko, a younger brother to Senator Wamakko, the former Governor of Sokoto, died at an Abuja Hospital.

The 50-year-old lawmaker’s death was confirmed by @HouseNGR. 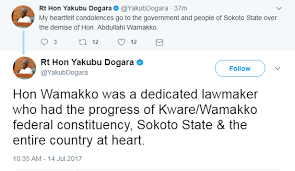 The Speaker of the House, Yakubu Dogara led a tribute to the deceased. In a post on his Twitter account, he described the late politician as “a dedicated lawmaker who had the progress of Kware/Wamakko federal constituency, Sokoto State & the entire country at heart.”

In a statement later issued by Mr Turaki Hassin, Hon Dogara, noted that Hon Wamkko “was a patriotic, committed, peace-loving and hardworking lawmaker who gave his best for the service of his people and said the House will greatly miss him.”

Rep member for Asa / Ilorin West, Razak Atunwa, @Atunwa_1 also wrote that he was “Deeply sad to hear the news of your demise Hon Abdullahi Wammako.”