The Governor of Ogun State Ibikunle Amosun has a grudge against the Chairman of the All Progressives Congress, APC, because he was not allowed to “handpick” his successor.

The governor who at first rejected directive for an direct primaries in Ogun state, recently claimed that Adams Oshimohole and some leaders of the APC foisted Dapo Abiodun as the party’s candidate in the state.

But, Lanre Issa-Onilu, the National Publicity Secretary of the ruling party has refuted that allegation, saying that:  “It is a straight forward case. If we speak to the merit of this case, the whole world saw it; the visuals were everywhere, where the Ogun state governor gathered some aspirants, stakeholders and said clearly, there won’t be primaries and right there he pointed at who the next governor, senator, house of representatives candidates would be.”

Mr Issa-Onilu, an indigene of Kwara State also noted that Governor Amosun, a former Senator “named himself the next senatorial candidate.”

Speaking at the APC National Secretariat on Wednesday, he said:  “In the case of Ogun, after that exercise failed after they tried to handpick who will be what, they sent a letter that they have agreed on direct primary and the party has no choice than to endorse what you want.

“On the day they all came for screening including the governor, he suddenly left with other aspirants and returned back to Abeokuta; gathered some people and sent back to the NWC that they wanted indirect primary and the other aspirants said we were all here together, that they didn’t know when this change was made.

“Meanwhile, someone had gone to court and the court had barred the State executive from anything to do with the party but we all saw on national television where the State Governor and the State executive, actually conducted their own primary and the process threw up the Governor’s preferred candidate. it was the SSG in Ogun State, who was reading the result until it occurred to him that he had no power to announce the names, so he handed over to the state chairman of the party who for also shouldn’t have done that – he is statutory barred, the court had told him not to participate in the primary. Secondly, the state chairman has no power to conduct primary that power resides with the NWC.

“So whatever the governor did was self-help and there is no provision for self help in the party’s constitution. Eventually the NWC panel that was constituted to conduct the primary went to Abeokuta and did the primary. The governor’s preferred candidate chose not to participate in that exercise. So the party stands by the result of that primary it conducted in Ogun state.” 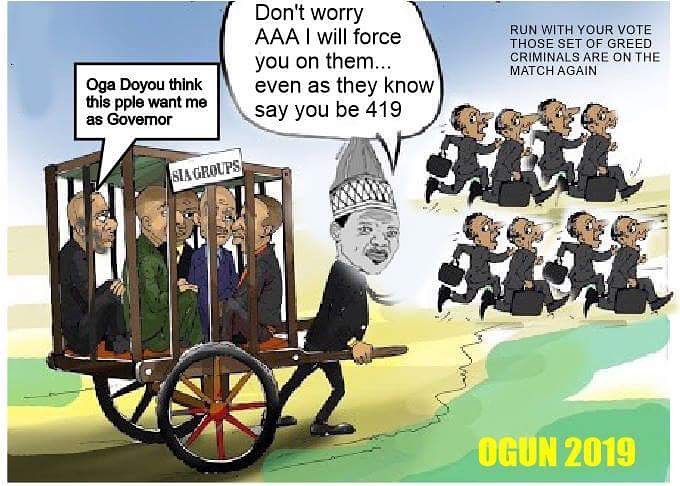