The Economic and Financial Crimes Commission led by Ibrahim Mustafa Magu, has denied a controversial tweet that was posted against the outgoing Governor of Ekiti.

The offending tweet which was posted hours after the Gubernatorial elections in Ekiti, pledged to begin an imminent investigation into the activities of  Ayo Fayose, who is to handover to the candidate of the All Progressives Congress on October 16, 2018.

This paper understands that Mr Fayose’s office grants him immunity from public prosecution at the moment, so it does not understand why did Mr Magu’s led EFCC had hurriedly posted such message which has since been deleted.

“The parri is over, the cloak of immunity torn apart, and the staff broken. #Ekiti Integrated Poultry Project Biological Concepts Limited N1.3bn fraud case file dusted off the shelves. See you soon,” the upsetting post reads.

Aside to the offending tweet, nothing unusual as been posted on the @officialEFCC account, leading many to believe that the claims of it been hacked is a bad attempt to cover up the issue.

READ ALSO : Corruption Briefing: Anti-Graft Tweet “Parri Over” To Fayose Proves That MAGU’s EFCC Is A Tool For Fighting Opposition 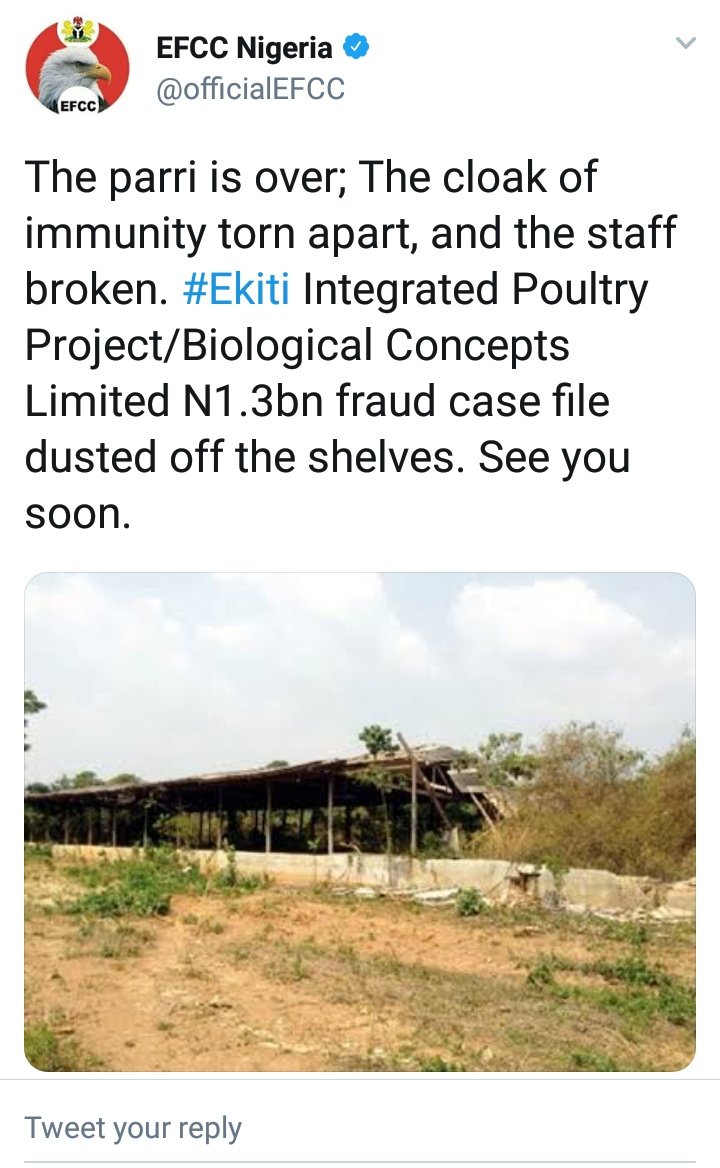 Judging by the mood of the nation, DENISAURUS News understands that the EFCC had to deny the tweet.

The spokesperson of the agency in a statement found online said, “the purported tweet does not represent the views of the EFCC.

“In the opinion of most commentators, the tweet betrayed the partisanship of the EFCC in the political contest in Ekiti state,” Wilson Uwujaren said.

“Against the background, the commission is constrained to state that the purported tweet does not represent the views of the EFCC. As a law enforcement organisation the commission is apolitical and was not involved in the recent Ekiti election.

“While it is true that there is a subsisting criminal charge against governor Fayose, the fate of the charge will be determined by the federal high court, Ado Ekiti, at the expiration of his tenure, not the EFCC.”

Allied sources who alerted this paper to the EFCC disclaimer, refused to say much other than to point at a scenario where their boss asked a colleague to decorate Ike Ekweremadu, the Deputy Senate President with an anti-corruption award only for him to later deny authorising the assignment after a backlash from the public.

Mr Magu, a perennial offender, has been criticised for targeting members of the opposition when fighting corruption.

The “corrupt” Commissioner of Police, whose nomination as the fourth chairman of the anti-graft agency was rejected twice by lawmakers, following an indicting report from the Department of State Security Service, DSS, was recently warned by the UK Government and asked to remain neutral in elections.

Despite, the warnings Mr Magu has continued to use his office to stifle opposition. The tweet sent out against Governor Fayose hours after the Peoples Democratic Party, PDP, lost an election in Ekiti confirms to many that the EFCC is deeply involved in politics.

Question now remain as to who sent the message and if it is confirmation of the partisanship of the agency whose boss was seen wearing a re-election pin of President Muhammadu Buhari on television.

The deleted tweet continues to generate conversation on how low the anti-graft agency has gone under Mr Magu’s leadership.

An aide to Governor Fayose, Lere Olayinka has demanded a “unreserved apology” from the agency.

“Me thinks EFCC must go beyond mere disowning the tweet and explain to Nigerians what informed it and tender unreserved apology.”

Just read that @officialEFCC has disowned its inglorious tweet about @GovAyoFayose and I wish to ask if EFCC has also disowned the twitter handle. Methinks EFCC must go beyond mere disowning the tweet and explain to Nigerians what informed it and tender unreserved apology.

Similarly, the handler of the verified @officialEFCC account was ridiculed when it denied that the corrupt boss of the agency did not divert salaries as exposed by this paper.

In a report published by DENISAURUS News on July 11, 2018, sources at the anti-graft commission informed this paper that new cadres who reported for training in March 2017,  had not been paid for a year and their 28 day allowance was not released to them.

The EFCC spokesperson, who refused to comment before the story with the title – How EFCC’s Magu Diverted Over N702M As 13 Months Salaries Of Newly Employed Operatives, Among Other Infractions was published, claimed that the new cadets were not “entitled to any 28 days allowance during training and the mandatory one year internship after training.”

READ ALSO : EXPOSED : How EFCC’s Magu Diverted Over N702M As 13 Months Salaries Of Newly Employed Operatives, Among Other Infractions

In a statement posted on the Commission’s Facebook page, Mr Uwujaren confirmed that  “officers of the DS Course 7 are yet to receive their June Salary.

He claimed that “the delay was caused by the simple fact that they were not enrolled into the Integrated Payroll and Personnel Information System, IPPIS, early enough to collect their June Salary. They have since been enrolled and would be paid their entitlement.”

But the public was not having any of the lies from the EFCC.

Odianosen Odion said: “Dear Magu, the same cabal that bought mansions abroad in your ‘holy’ name may have paid this same diverted sum into the foreign bank account they also opened in your name. Just check out for SMS alert!.”

Not satisfied with the brazen attempt to lie over the diversion of salary, a story that was reported by Adenike Lucas and Danjuma Aliyu, Okpotako Doncan Festus said: “there’s no difference between efcc management and Garba Shehu and lie Mohammed.. too much lies everywhere.” 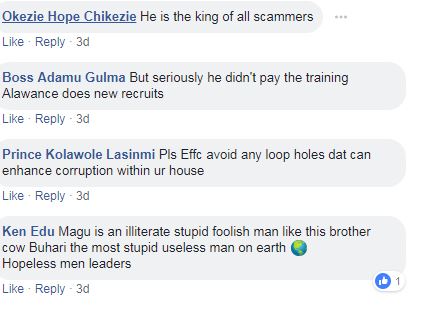 The EFCC got more negative reactions on its other social media account over the same issue.

“I guess he diverted Recovered loots then,” a Twitter user said.

Another agreed that Mr Magu, who at the Senate hearing claims to have attended Ahmadu Bello University, ABU Zaria, but whose agency’s website had it that he went to University of Maiduguri, stole the monies.

“He did. He pocketed their salary,” @ojiakorshantel1 wrote online.