The US President has spoken about the incessant murder of Christians in Nigeria and has told President Muhammadu Buhari the killing is a “problem.”

Speaking in a joint press briefing at the White House, President Donald Trump, said: “We have had very serious problems with Christians who are being murdered in Nigeria.”

President Trump added: “We are going to be working on that problem very, very hard because we cannot allow that to happen.”

Last week, two priests were killed by herdsmen in Benue.

President Buhari, who is currently on an official visit to the United States of America, has been criticised for being soft on the perpetrators of the heinous crimes.

The Christian Association of Nigeria, CAN organised various peaceful protest, last month to bring the issue of killer herdsmen to the attention of the President.

But, the President who recently declared plans to run for a second term in office has not done much to receive their recommendations.

President Buhari refuses to lay blame to fulani herdsmen for the killings in Nigeria. In Washington, he told the US President that “Nigerian herders don’t carry anything more than a stick and occasionally a machete to cut down foliage and give it to their animals, these ones are carrying AK-47.”

Also during a visit to Bauchi, Nigeria’s Commander-in-Chief said he himself could have joined herdsmen in the fight against farmers.

Speaking at the Abubakar Tafawa Balewa Stadium, Bauchi, President Buahri said: “Now, look at the farmers/herdsmen’s clashes in the northern part of this country. I have been telling people that if I had not gone to school, I would not have gone into the military and where I come from since my cows are finished; maybe, I would have been involved in this fight.

“But because I went to school, I got a job to do and because of that, desertification is everywhere, there is no bush we will go to and cut down trees and destroy farms and the rainy season is not promising. Because of that, education is the guarantee.”

The Nigerian President had previously asked the people of Benue – where many of the killings have taken place, to be more accommodating of herdsmen.

“I ask you in the name of God to accommodate your country men,” he said in an address to traditional rulers and the Governor of Benue at the Presidential Villa.

This statement was not well received by Nigerians. They say the President should end the killings, otherwise he should be relieved of his duties.

One of such groups calling for President Buhari’s removal is the Catholic Bishops’ Conference of Nigeria.

In a statement, they advised that the 75-year-old former General, should consider stepping aside as he and Security Chiefs in the country have been unable to secure the lives of the people in the North Central. 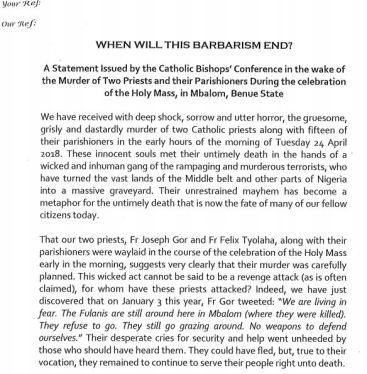 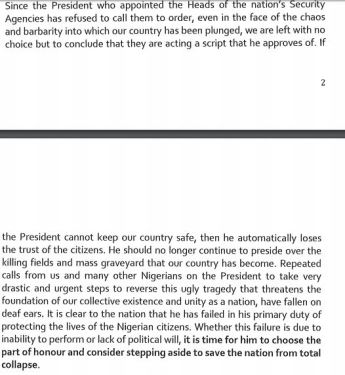