A hilarious spoof letter addressed to the US President, Donald Trump has hit the net.

The humours letter, signed Elizabeth, by a person who aims to impersonate the Queen of England, withdrew the state house invite offered to President Trump by the Prime Minister.

“Mr President, your recent decision represents a divisive politics inimical to universal standards of human right and moral decency. Britain cannot subscribe to this most grievous assault on Muslims nations and human decency as a result I must not formally withdraw the invitation extended to you by my prime minister,” the parody letter states.

More than 1.7 million people have signed a petition to prevent the controversial 45th US President, from coming on a state visit to the UK because his recent executive order which prevents Muslims from seven countries to visiting the United States for a period of 90 days.

Members of Parliaments will debate whether President Trump should be granted a UK state visit on February 20.

Despite frantic calls for a reaction from the public. The Queen is apolitical and is saying nothing. Buckingham Palace has declined to comment on the row.

However, the letter which shows itself for the comedy that it is, by signing out with yours sincerely, tweet me, does welcome the new President. 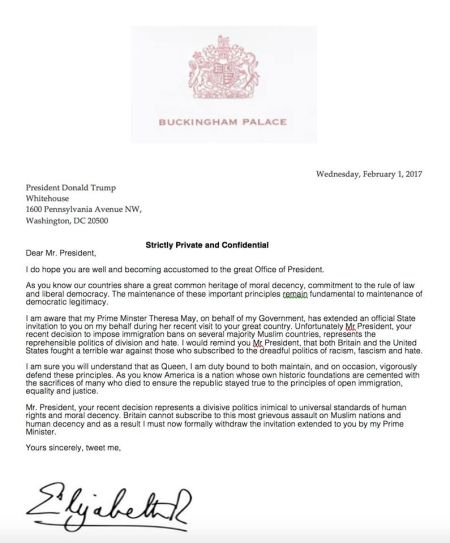