Staff members of the Economic and Financial Crimes Commission, EFCC continued their struggle for justice as they submit a second petition against their corrupt boss, Ibrahim Mustafa Magu to the President.

The aggrieved workers have long exposed the crimes of Ibrahim Mustafa Magu to reporters from this newspaper.

Their allegation were later confirmed in an indicting report written by the Department of State Services, DSS against Mr Magu. In a memo to Abubakar Malami, the Attorney- General of the Federation and Minister for Justice, Lawal M Daura, the Director General of the DSS said “Magu is a perennial offender and cannot change.

“An officer appointed as Ag. Chairman of EFCC should by all means be one of impeccable credentials, with proven integrity and capacity to lead the nation’s fight against graft in high and low places. Thus far, it is evident from Magu’s antecedents that he is by no means that kind of officer.”

If confirmed as EFCC Chairman, Mr Magu “will  indulge in other unprofessional and criminal conducts for personal aggrandisement contrary to his oath of office,” the DSS report written by Alhaji Daura warned.

Consequently, the Borno born corrupt officer has subjected staff members who blew the whistle on him to severe abuse at work.

Last week they submitted a petition to the Senate stating that they were being denied promotion and deliberately under developed and “reduced to nothing.” In this instance, the petition states that “Mr Bashir Bello, a fellow chartered accountant in the accounting department, who has been due for promotion to Directorate Level is being victimised and reduced to nothing. Because the Ag. Chairman does not want any core staff to develop.”

In response, Mr Magu, a level 14 Deputy Commissioner of Police claimed that the petition submitted to the Senate President, Bukola Saraki on November 6, was sponsored.

The anti-corrupt boss, who claims people are trying to frustrate him to quit, despite being rejected twice by the Senate, is known for sweeping any allegation made against him under the carpet, under the guise of it being “corruption fighting back.”

In May, when this newspaper exclusively revealed the suspension of Nigeria’s Financial Intelligence Unit from a world financial server based in Toronto, Canada, Mr Magu said Adenike Lucas, the Editor of DENISAURUS News was sponsored. Mr Magu’s claim were later rubbished when the Egmont publicly confirmed the suspension three months after the expose.

Core staff have gotten in touch with this newspaper again to inform reporters of the new petition that was submitted to the President on November 8.

The Save Our SOS letter written by a concerned EFCC operative, calls on President Muhammadu Buhari to “urgently come to our aid, as our careers are in jepoardy.

“We have been forced to resort to this medium to express our fears over the decay and looming danger in our organisation. Every effort to seek redress for our plight through official means has not yielded the desired result,” read the petition.

The petition states that Mr Magu has an “outright hatred and disdain for us the civilian and indeed the real operatives of the Commission” and “has ensured that the Commission’s operations are dominated and managed by his boys from the Nigeria Police.

“To perpetually put down and frustrate us the core EFCC operatives, the Acting Chairman has stunted our growth in the system through lack of promotion.” For instance, the petition states that “Course I officers were last promoted in 2012.

“They have been on Grade level 13 for the past five years without promotion. This is to ensure that they are forever subservient to their Police counterparts.”

The concerned staff accused the Acting Chairman of running “media trials as a means of generating tension and drawing attention to himself as the’chief corruption fighter’ in the country, saying it is why there has been no conviction of any Politically Exposed Person during Mr Magu’s reign at the top of the anti-graft agency.

“Our Chairman believes that if the media can report ‘it’ then the public will believe it. So we have several unresolved cases which though have become media sensation, are yet to lead to any meaningful prosecution and conviction.”

“Your Excellency, it is a common knowledge within the Commission that our Acting Chairman, Ibrahim Magu paid one of his agents in Premium times Three Million Five Hundred Thousand Naira (N3.5) to break the Abdulrasheed Maina’s story on the online news platform, however haphazard.”

The last part of the SOS letter begs President Buhari to act fast in order to prevent the Commission from sinking any further.

“Finally Your Excellency Sir, although there are still many anomalies plaguing government’s anti-corruption was as a result of the Acting Chairman’s leadership, we are hopeful that the urgent intervention of Mr. President will save us and our beloved Commission, and the President’s War Against Corruption.” 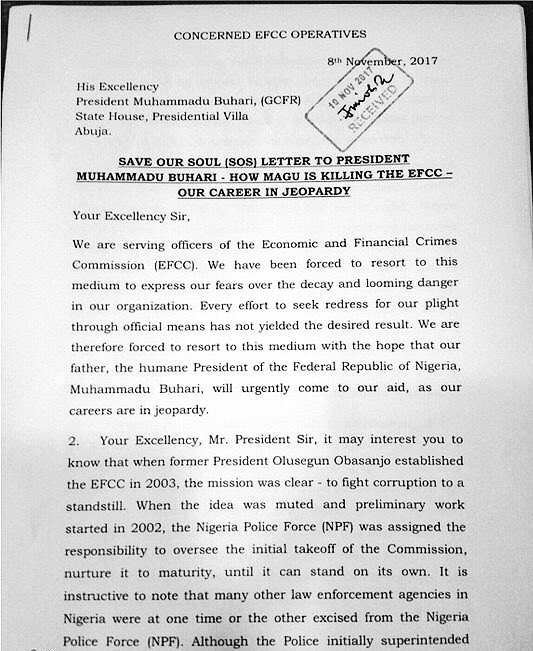