President Muhammadu Buhari is asking the people of Gombe – a state where he received (361,245) over 82 percent of the votes in 2015, to please vote for him a second term.

The 76-year-old President, who is seeking a second term despite opposition from former leaders such as Olusegun Obasanjo, explained to the people who attended his campaign rally why he needed to remain in office, explaining that he has plans to take them to the next level.

So far, Nigeria’s President, the first to defeat an incumbent through the polls, believes he has delivered his promise on the war against Boko Haram and based on the new Transparency International index, he has been able to reduce corruption in the country.

President Buhari who took some time to flag off an oil and gas exploration site in the state is promising to take Nigeria to the next level.

While speaking to the mammoth crowd at the Gombe Township Stadium, he pleaded for four more years so he could consolidate his achievements.

The launch of oil drilling in Kolmani River-II, means Gombe would soon be added to the list of oil producing state.

President Buhari said: the “spud-in of Kolmani River-II well, part of the Gongola Basin, Upper Benue Trough was part of his next level agenda to make Nigeria an industrial economy.

“Today’s event is not only a reflection of our success story but a landmark of promise kept to the Nigerian people.

“Our next level is to ensure exploration effort in all our frontier Basins of Lake Chad, Gongola, Anambra, Sokoto, Dahomey, and Bida Basins, as well as Benue Trough are intensified to usher in more prospects in Nigeria.”

The President who also made a visit to the Emir of Gombe, Alhaji Abubakar Shehu Abubakar III, at his palace in Gombe, commended the state Governor, Ibrahim Dankwanbo, a member of the opposition Peoples Democratic Party, who was present to welcome him.

A leading member of the PDP was Bala Bello Tinka, who defected to the ruling All Progressives Congress was also present at the rally.

President Buhari noted that “courtesy of Dankwambo, Gombe State has gone far ahead of its peers in development.

“What the state needs in 2019 is a focused leader; one who is going to build on those shining legacies for the continuous development of the people.” 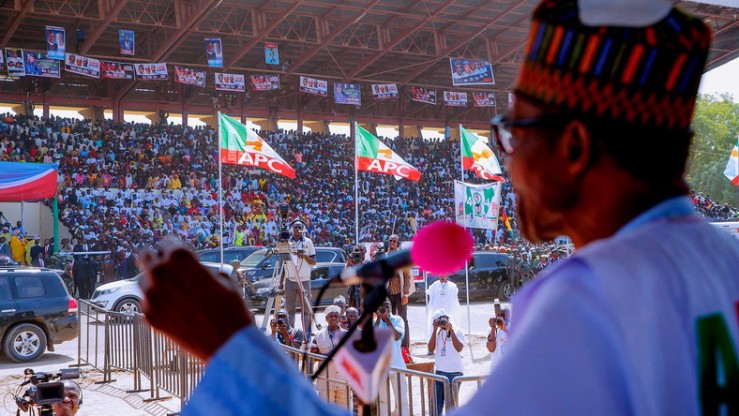