So far, much noise has been made about the discovery of assets belonging to various suspects, but not much is being said about the successes in the corruption fight itself.

That’s because the Government has not achieved much in this area.

READ ALSO : THE TRUTH ABOUT THEM GHOST RECOVERIES AND THE REPATRIATED FUNDS FROM SWITZERLAND

The reason for the failure to the corruption fight starts with Ibrahim Mustafa Magu, a perennial offender, whose nomination as the chairman of the Economic and Financial Crimes Commission, EFCC was rejected following an indicting report from the Department of State Security Service, DSS.

Mr Magu was also accused of living a double life by his staff members.

Several petition from aggrieved staffers of the commission was published on this website at different point, but the President who received advanced copies of the news report has not said anything publicly.

The President’s favourite thing to do is to stay mute where his people are being accused of corruption.

Among the list of people to have the president’s silence over their conduct is the Kano State Governor who was caught on video collecting bribes from contractors in dollars.

Another to have the protective silence of the President is one Okoi Obono-Obla, an appointee of the “anti-corruption” regime who the West African Examinations Council, WAEC confirmed forged his results.

Despite all the calls to remove him for the criminal offence of exam malpractice, President Buhari has met this Paper with silence. Well, turns out Mr Obono-Obla’s role is not even backed by the Nigerian constitution.

A five-member panel of the appellate court led by Hussein Muhktar ruled on Monday that the Special Presidential Investigative Panel for the Recovery of Public Property, SPIP chaired by Mr Obono-Obla is only empowered by law to conduct investigation.

According to the judge, no power or authority is conferred in Mr Obono-Obla’s panel to prosecute offenders.

The judge went on to state that there are agencies set up to perform those duties already.

In Justice Muhktar’s words: “the panel cannot clothe itself with the clothes not given to it by the Act that established it. It cannot take over the responsibilities of the EFCC.

“The power to investigate and prosecute is solely for the EFCC and such cannot be taken over by any person or agency.

“The provision of the Act is unambiguous and not confusing. The powers of the panel are to conduct investigation on any officer who has corruptly enriched himself of breached the code of conduct.”

In short words, SPIP is duplicating the role of another agency – the Attorney General of Federation and the chairman of the EFCC.

So, the questions are rolling in, why did the Vice President, Yemi Osinbajo constitute the SPIP? Was he trying to overtake the AGF? Is this further proof of his abuse of the office of the AGF. Is not it enough that he runs the AGF/Ministry of Justice through the “rule of law” parallel office?

That Obla’s role isn’t backed by the constitution and his shoddy WAEC result which will have an adverse effect on his law school degree, DENISAURUS News is asking that vital question, is President Buhari really fighting corruption? 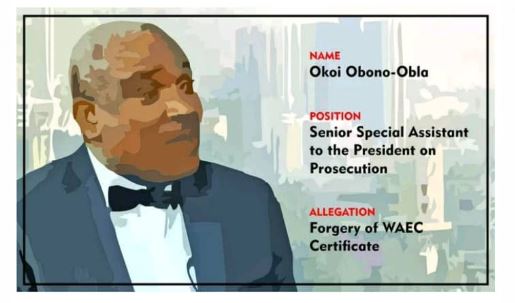