The Kano State House of Assembly, KSHA has launched an investigation into the claims that the Governor, Abdullahi Umar Ganduje collected 5 million dollars as bribe.

The newspaper says it has 15 videos evidence of the Governor collecting the kickback.

It released two of the videos which has now been widely shared on social media.

In reaction, the KSHA promised to investigate the matter.

The editor of the newspaper Jaafar Jaafar has been summoned by lawmakers to “attend an investigatory hearing relating to your publication and video cliffs showing the Executive Governor of Kano State, Dr. Abdullahi Umar Ganduje been caught severally on spy camera receiving bribe from contractors.

“All hearings will be public, and you will be asked to talk through your recollections of the above incident(s), you will also be given opportunity to offer your perspective, tender exhibits and ask questions.”

The investigatory hearing will hold on Thursday 26th October 2018 at 11am.

Mr Jafaar was advised to attend the meeting with “your lawyer or a workplace colleague.” 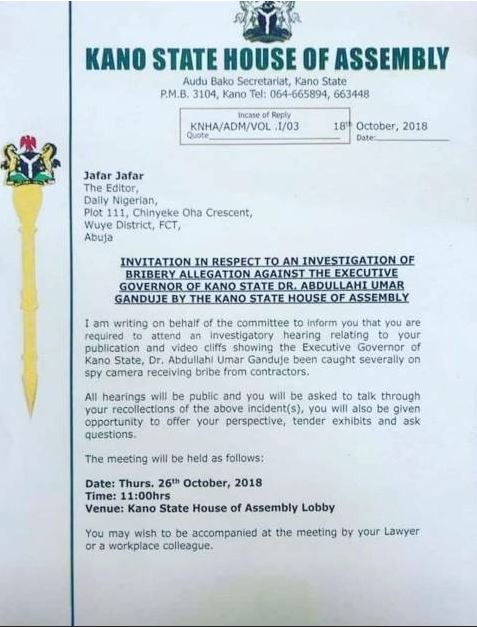