Wole Soyinka has criticised the Nigerian President for his recent decision to praise General Sani Abacha and then honour Moshood Kashimawo Olawale Abiola.

President Muhammadu Buhari, 75, announced on June 6th that Chief Abiola, the presumed winner of the 1993 cancelled elections was to be conferred with the title of Grand Commander Order of the Nigeria, GCFR.

MKO’s running mate Babagana Kingibe and pro-democracy activist, late Gani Fawehinmi were both awarded with the title of Grand Commander of the Niger, GCON.

Despite the fact that the 1993 election was annulled by General Ibrahim Babangida, Chief MKO Abiola declared himself President of Nigeria and in 1994, he was jailed by General Abacha, a “tormentor” according to Professor Soyinka.

READ ALSO : Prominent June 12 Activists To Be Given National Honours

At the investiture ceremony today, President Buhari apologised to the family of the late business man who was prevented from taking his mandate before his untimely death in a government prison on 7 July, 1998.

“On behalf of the federal government, I tender the nation’s apology to the family of late MKO Abiola who got the highest votes and to those that lost their loved ones in the course of June 12 struggle,” President Buhari said.

DENISAURUS News understands that to honour the deceased, June 12 would now be celebrated as Democracy Day instead of May 29. 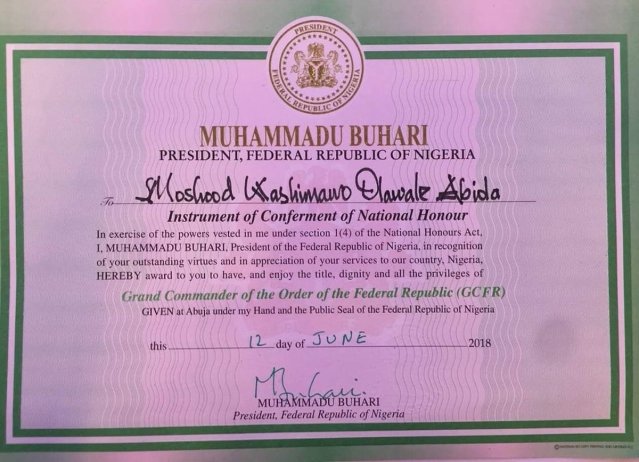 But before now, President Buhari, who has announced plans to seek re-election in 2019, had praised his former boss General Abacha – the man who went on to benefit largely from the annulment of the 1993 elections.

He said at an event in the Presidential Villa that “no matter what opinion you have about Abacha, I agreed to work with him and the PTF road we did from here to Port Harcourt, to Onitsha, to Benin and so on.”

The 1986 Nobel Laurette advised the President to “stop confusing Nigerians.

In a speech given at the Presidential Villa during the conferment of posthumous award, Professor Soyinka said: “In one breath you extol Abacha, in another breath you honour MKO.

“How can you extol Abacha who if he were alive today would be in the International Criminal Court?”

READ ALSO : “You’re In A TRANCE,” Nobel Laureate BLASTS President Buhari For Many Errors In Administration

Critics have also disparaged the President over the award. Some believe that the #June12 honours are been given in an attempt to placate disgruntled leaders in the south west who were side-lined by the Buhari led administration.

“Buhari appealed to the South West in 2015 by giving them the VP slot. He is appealing to the region again by declaring June 12 a national holiday and a better democracy day than May 29th. The South West should not fall for this cheap antics. Buhari is unfit to run Nigeria,” @tksilicon posted online.

However, Ganiyat, the widow to the late human right activist Mr Fawehinmi, revealed that her husband would have been delighted about today’s honour.

She said: “I was a bit disturbed. Every time the security will come, turn our house upside down, even his office was broken into, they took away many files during Mr Babangida’s regime and they were not returned till date.

“So I just thanked God that I am alive to witness today and I know that my husband will turn in the grave for this June 12 that is being actualised because he really fought and died for it.

“I believe God has a purpose for it, I believe that is how God wants it because you can’t run a race ahead of God. So, God has a purpose of actualising it today which is exactly 25 years after Hole ‘93 when Abiola wanted to be the President.” 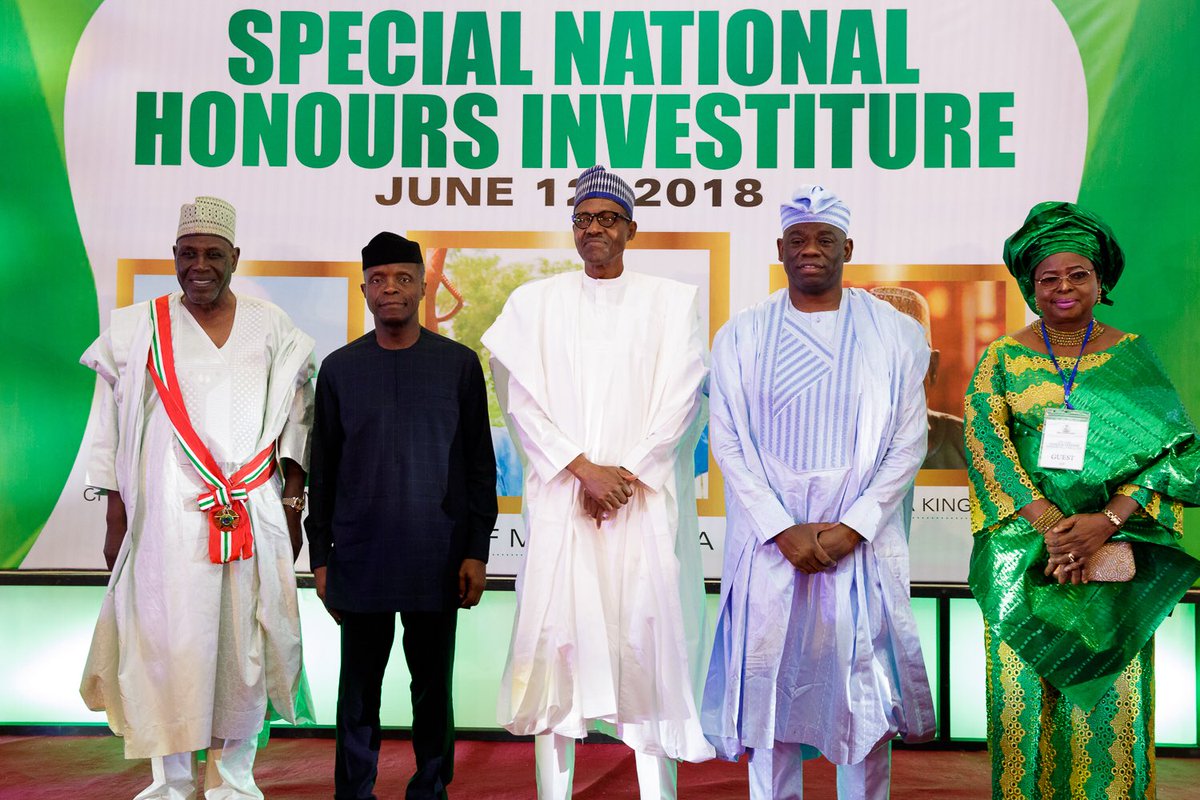