A group of protesters have demanded the immediate removal of the acting chairman of the Economic and Financial Crimes Commission, EFCC, for President Muhammadu Buhari’s fight against corruption to be successful.

The group under the banner of the Global Centre for Conscious Living Against Corruption, GLOCCOLAC, said Ibrahim Mustafa Magu “must go,” because he has become an obstacle to President Buhari’s administration – who campaigned to bring down corruption.

Twice the Borno born Deputy Police Commissioner was rejected by the Senate due to an intelligence report written by the Secret Service.

Having gained inside knowledge from staff on the corruption perpetuated by the anti-graft boss, Adenike Lucas, the Editor of DENISAURUS News, led a campaign calling for the release of the intel report against Mr Magu.

The DSS report when it was finally published proved this website right on its allegations against Mr Magu.

The DSS report indicated that the ‘rejected’ EFCC boss had failed its integrity test and “would become a liability to the anti-corruption crusade of the present administration if confirmed.”

A source who obtained an exclusive video footage of yesterday’s protest and shared it with DENISAURUS News, said they demonstrated against Mr Magu’s stay at the agency as he had “become an “obstacle to the fight against corruption.”

Despite a high media campaign, the EFCC has lost many crucial cases against several Politically Exposed Person, PEP.

Critics blame the EFCC acting boss who is quick to release information on social media which can, then not be used in the courts.

For example, it was noted that Bawa Usman Kaltungo, known as a stooge of Mr Magu in the Lagos EFCC office, leaked a few highly confidential details of the Abacha loot.

The document which was part of an official document requested by the EFCC from another government agency was deliberately leaked on Facebook.

See picture evidence of the leak below. 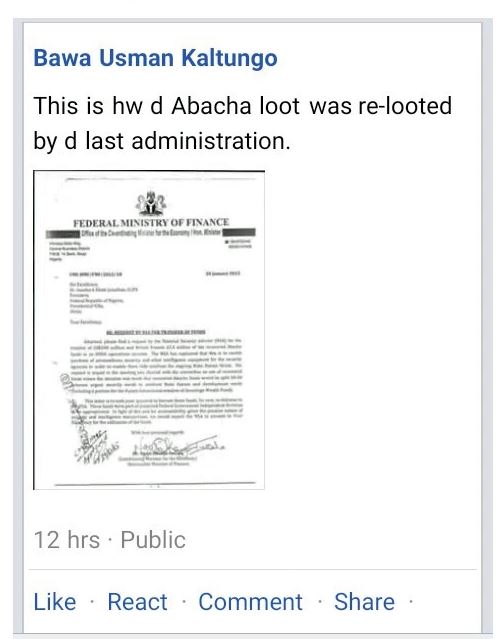 An EFCC source, who spoke on condition of anonymity out of fear of reprisals from Mr Magu, explained that Mr Kaltungo’s action could “bring down the image of the EFCC.”

It was noted that such “vital and sensitive document would only have been retrieved by a law enforcement agency following an investigation.”

The EFCC boss himself has been reprimanded several times for abusing privileged information.

One of such time was the suspension of the Nigerian Financial Intelligence Unit, caused after Mr Magu was discovered to be sharing sensitive information with media allies.

READ ALSO : Nigeria “Completely Shut Down” From Accessing Financial Intelligence From Around The World Due To Sabotage By Magu Of EFCC (WORLD EXCLUSIVE)

Dr Gabriel said: “Ironically, the mode of operation of the EFCC has brought several cases of gross violation of human rights of the citizens. The fact that EFCC goes to the extent of trying suspects on the pages of newspapers is rather alarming and embarrassing Nigeria in the League of Nations. This explains why the EFCC has been losing most of its high-profile cases in the courts of law.”

Mr Magu has been accused in the past of sharing sensitive documents with his allies. One of them being the retired Air Force Chief, Umar Mohammed who was arrested by the DSS.