The rejected chairman of the Economic and Financial Crimes Commission, EFCC, Ibrahim Mustafa Magu has reportedly returned a seconded corrupt officer, Iiyasu Kwarbai back to the Nigerian Police Force, NPF.

DENISAURUS News reported a rift between CSP Kwarbai, a known friend of Mr Magu, this month. 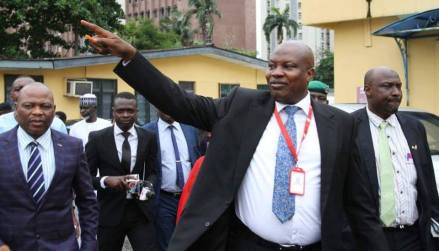 DENISAURUS News learnt that Mr Magu accused his police lackey (CSP Kwarbai) of orchestrating a plan to oust him and take over his position as the chairman of the EFCC.

Consequently, Mr Magu, said to be ‘paranoid’ about his position at the commission, decided to transfer CSP Kwarbai out of Lagos office of the Commission, where he was the Deputy Director of Operations and Head of Operations in the Lagos Zonal Office of the EFCC, back to Abuja without a portfolio.

Similarly, Mr Magu accused him of refusing to breach the Public Service Rule, by recalling staff who are legally on annual leave to resume back to the office.

READ ALSO: Exclusive: Magu Has Overstayed His Welcome At The EFCC

CSP Garba Gulum has assumed the role of Acting Head of Operations Service.

Mr Magu’s nomination as chairman of the anti-graft commission was rejected by the Senate on Thursday, 15 December, 2016, following an intelligence report it received from the Department of State Security, DSS.