ABUJA – A lawmaker who was sanctioned for making an offensive statement last week, made an illegal entry to the red chamber today, in order to steal the mace.

Senator Ovie Omo-Agege, who is on suspension for 90 days, came with armed hoodlums and was able to take the piece of ornament which stands as the symbol of authority in the National Assembly.

DENISAURUS News learnt that minutes after the Deputy Senate President, Ike Ekweremadu began the session for the day, the lawmaker who represents Delta Central Senatorial district and his thugs forced their way into the chamber causing many to panic.

The 54-year-old took to his heels after seizing the mace.

By taking the mace forcefully, the Senate Chairman on Media and Public Affairs said Senator Omo-Agege has engaged in “an act of treason.”

Senator Aliyu Sabi Abdullahi said: “This action is an act of treason, as it is an attempt to overthrow a branch of the Federal Government of Nigeria by force, and it must be treated as such.

He adds: “All security agencies must stand on the side of due process and immediately mobilize their personnel to retrieve the mace and apprehend the mastermind and the perpetrators of this act

“This action is also an affront on the legislature, and the Leadership of the House has come to express their support against this action.” 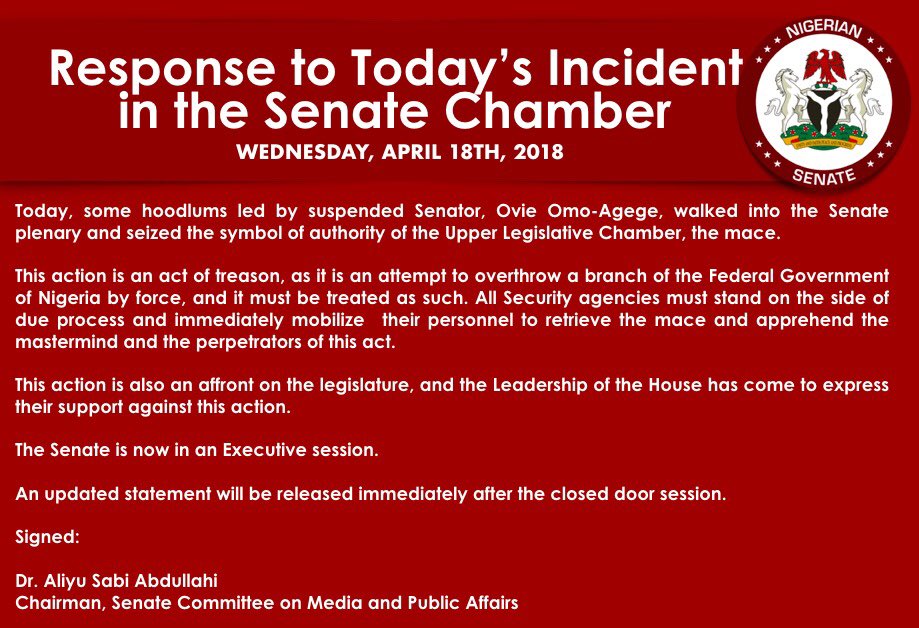