Abubakar Malami, SAN, Attorney General of Federation and Minister of Justice for Nigeria has obtained an order which bans the Indigenous People of Biafra, IPOB.

The order granted by a Federal High Court sitting in Abuja proscribed the terrorist organisation, which has been agitating for the realisation of the Republic of Biafra in Nigeria.

Justice Abdul Adamu Kafarati, the acting Chief Judge of the Federal High Court granted the prayer of Mr Malami SAN, who on Wednesday asked the court for an order declaring that the activities of IPOB in any part of Nigeria, especially the South-east and South-south of Nigeria, amounted to acts of terrorism and illegality.

The judge said: “Upon reading through the affidavit I support, certificate on compliance with Section 84 of the Evidence Act 2011 both sworn to by CPL Kolawole Mathew of the Nigerian Army and written address attached thereto all dated and filed at the court registry, Abuja.

“It is hereby ordered as follows: That the application is granted as prayed.

“That an order declaring that the activities of the respondent, IPOB, in any part of Nigeria, especially in the South-east and South-south regions of Nigeria, amount to acts of terrorism and illegality, is granted.

“That an order proscribing the existence of the IPOB in any part of Nigeria, especially in the South-east and South-south regions of Nigeria, either in groups or as individuals by whatever names they are called and publishing same in the official gazette and two national dailies is granted.

“That an order restraining any person or group of persons from participating in any manner whatsoever in any form of activities involving or concerning the prosecution of the collective intention or otherwise of the respondent, IPOB, under any name of platform however called or destined, is granted.”

In Nigeria, an organisation can only be declared a terrorist organisation under the Terrorism (Prevention) Act 2011.

Section two of the bill states that “the judge in chambers may on an application made by the Attorney General on the approval of the President declare an entity to be a proscribed organisation.” 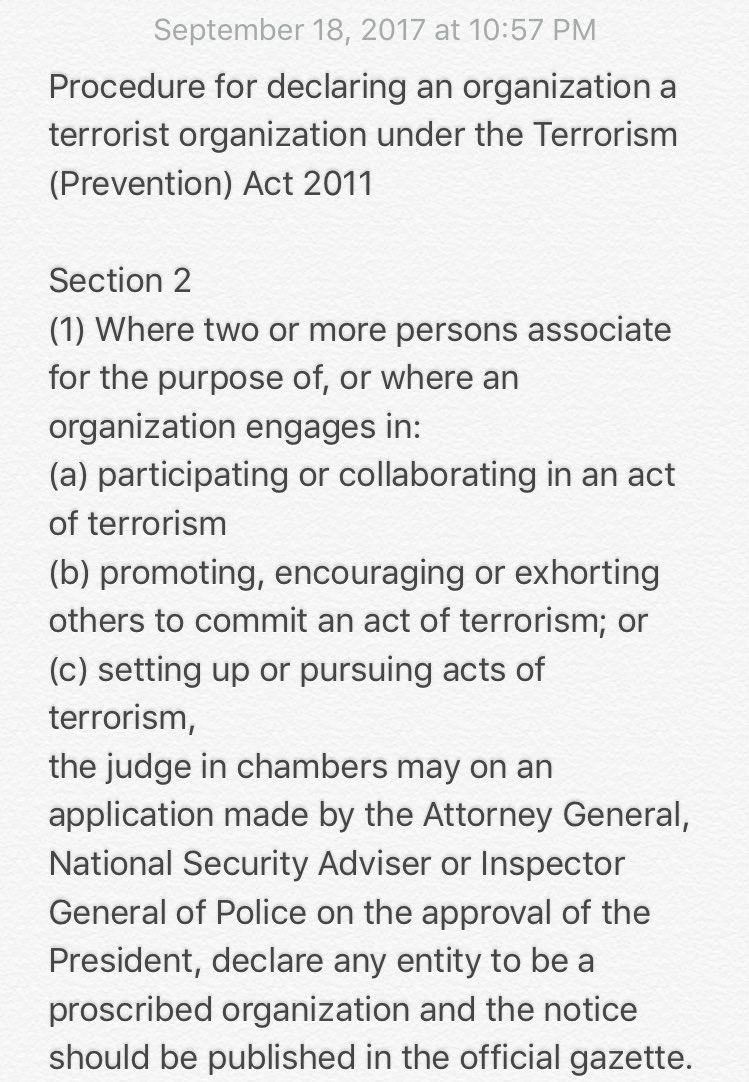 Mr Malami, a senior advocate of Nigeria has followed due process by applying for the order.