President Muhammadu Buhari has written a letter to thank his counterpart in Guinea, Alpha Conde, for the nationwide prayers held last week by Guineans for his recovery and good health.

“I thank you for your kind and thoughtful action in organizing nationwide prayers for my good health. It is a gesture that I will forever cherish and treasure,” President Buhari, 74, wrote in a letter to President Code, who is the current Chairman of the Assemblies of Heads of State and Government of the African Union.

“Your Excellency will be pleased to hear that I am making good progress, and as soon as doctors advise, I shall return to my duties and continue serving the Nigerian people who elected me and are daily praying for my recovery.”

The message conveyed in a state house press release, states that President Buhari is “making progress and as soon as doctors advise”, he said: “I shall return to my duties and continue serving the Nigerian people who elected me and are daily praying for my recovery.” 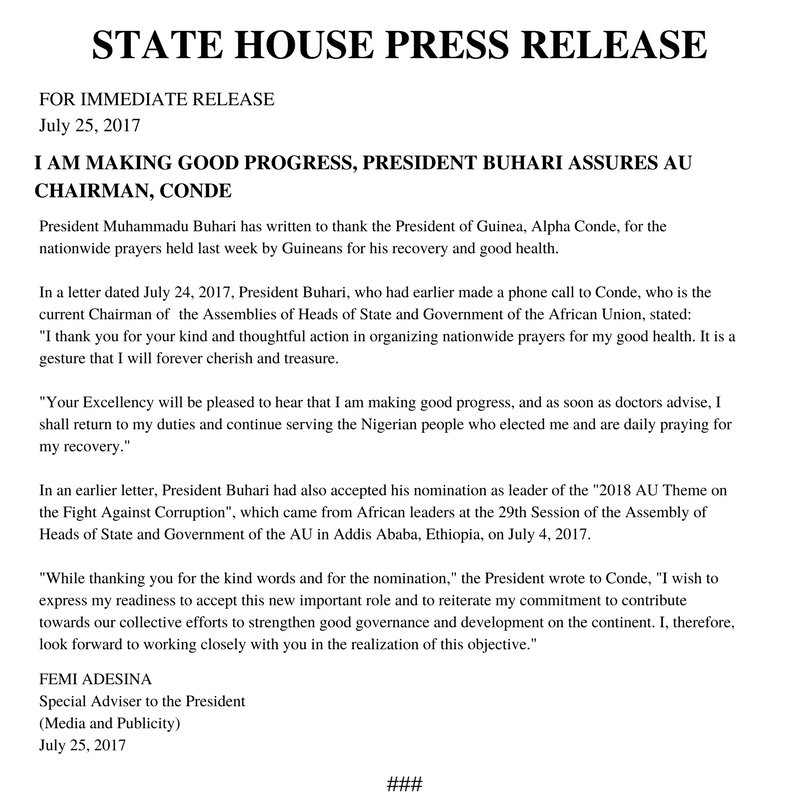 READ ALSO : Revealed : President Buhari Was Poisoned But All Those Involved Have Been Identified By The DSS

Nigeria’s Commander-In-Chief has been receiving medical treatment in London since May.

He hosted the a few Governors along with the national chairman of the All Progressives Congress in London this week and he is said to be on the mend.

Governor Rochas Okorocha who was among the delegate that visited President Buhari has said he would be back to home soon.

Similarly, Aisha Buhari noted on her arrival back to Nigeria that “God has answered the prayers” made on behalf of her husband.

READ ALSO : President Buhari’s Wife Hints At His Possible Return, Says “Hyenas and Jackals Will Soon Be Sent Out Of The Kingdom”

The ministers are replacement for James Ocholi, the former minister of Kogi who died in a car accident and Amina Mohammed, the minister of Gombe state who is now the Deputy General-Secretary of the UN, were confirmed by the Senate in April.