Theresa May has announced a snap general election in a statement outside Downing Street.

The Prime Minister, who made the announcement straight after a meeting with her cabinet this morning, confirmed that a General Election will be held on June 8, 2017.

The cabinet are said to be in support of their leader who is said to have informed the Queen of her intentions to call the early elections, during a telephone conversation last night.

She explained that the reason for calling the election was because: “The country is coming together but Westminster is not.

“Division in Westminster will risk our ability to make a success of Brexit and it will cause damaging uncertainty and instability to the country.

“So we need a general election and we need one now, because we have at this moment a one-off chance to get this done while the European Union agrees its negotiating position and before the detailed talks begin.

“I have only recently and reluctantly come to this conclusion,” she added.

DENISAURUS News reported a few hours ago that the PM, who has a 21 point lead, was planning to call for an early election, which would require a vote at the House of Commons, due to the Fixed Term Parliamentary Act.

The Act introduced by former Prime Minster, David Cameron, means a general election is to be called every five years. The next election was meant to be in 2020.

A vote will hold at the Commons tomorrow over the issue. Mrs May needs Parliament’s backing to hold a vote before 2020.

Mrs May’s statement is seen as a U-Turn on a campaign promise she made not to call for an early elections.

The PM said: “It was with reluctance that I decided the country needs this election, but it is with strong conviction that I say it is necessary to secure the strong and stable leadership the country needs to see us through Brexit and beyond.

“So, tomorrow, let the House of Commons vote for an election, let everybody put forward their proposals for Brexit and their programmes for Government, and let us remove the risk of uncertainty and instability and continue to give the country the strong and stable leadership it demands.”

Jeremy Corbyn, the leader of the opposition welcomed the news, saying “the PM’s decision to give the British people the chance to vote for a government that will put the interests of the majority first.” 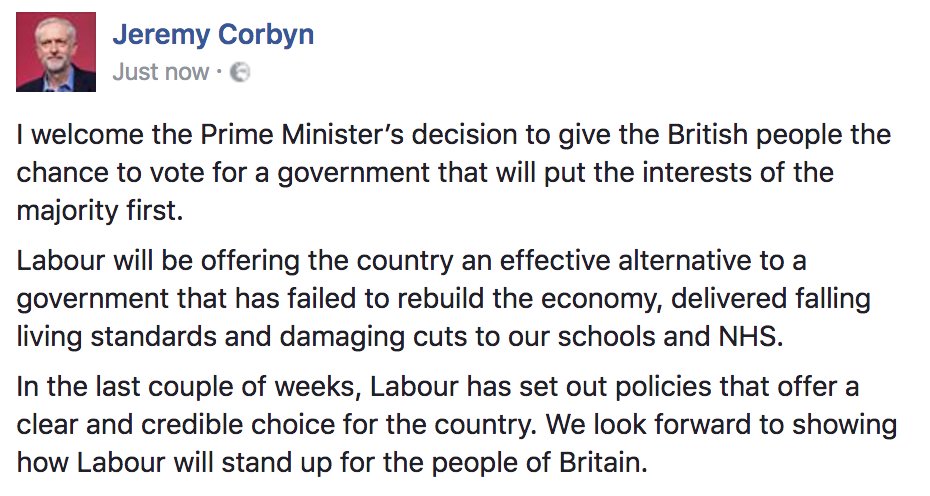 The leader of the Liberal Democrat, Tim Farron responded to the call for a general election, saying: “If you want to avoid a disastrous Hard Brexit. If you want to keep Britain in the Single Market. If you want a Britain that is open, tolerant and united, this is your chance.

“Only the Liberal Democrats can prevent a Conservative majority.”

Scottish First Minister, Nicola Sturgeon, who has called for a second referendum following the Brexit negotiation has given her own reaction via a post on twitter.

“The Tories see a chance to move the UK to the right, force through a hard Brexit and impose deeper cuts. Let’s stand up for Scotland. #GE17,” she wrote.

One thought on “BREAKING: Theresa May Calls For Snap General Election”