“I am a lawyer and believer in free speech,” Bauchi State Governor speaks on ‘illegal’ arrest of blogger #MusaAzare

The Governor of Bauchi State Mohammed Abdullahi Abubakar has ordered for the “immediate” release of Musa Babale Azare.

According to RightsAfrica, Mr Azare a popular blogger, social commentator and staff of the Federal Judiciary who criticised the state Governor was allegedly arrested illegally by loyalists of His Excellency, Mr Abubakar on Saturday 20 August.

A witness present at the time the blogger was arrested claimed that  at “4:48pm a police pick up with registration number YDB 21 7AA Blue color dark with Nigerian Police Force (Bauchi State Command) written all over it, kidnapped the person in picture (Musa Azare) at No. 33, Lome Crescent, Zone 7, Abuja.

The person said that those who took Mr Azare were “under the directives of Bauchi State Government.”

But in a twitter update, posted on Sunday August 22, Governor Abubakar, a trained lawyer, denied authorising such arrest, saying “This is untrue, as I just returned to (the) country from Asia last night.”

In a series of tweets from his verified account @GovMAA, he ordered for Mr Azare’s immediate release.

“Earlier this evening, I was informed that a blogger from Bauchi, and critic of my government, was arrested,” he tweeted.

“The report I was given accused the blogger of cyber stalking and other alleged offences, however, he went to state that as  lawyer and believer in free speech in democracy,  “I have asked for his immediate release.” 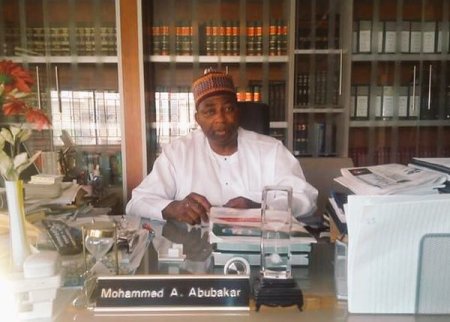 Mr Azare has since been released on bail. But his arrest which followed  the detention of  a fellow blogger Abubukar Sidiq Usman has unsettled many Nigerians.

Mr Usman published an article said to be unfavorable to  Acting Chairman of the  Economic and Financial Crimes Commission, Mr Ibrahim Mustafa Magu on August 2. He was arrested  by armed operatives of the EFCCC led by  Sambo Mayana and  with cyber stalking on August 8.

The EFCC boss also denied authorising the arrest of Mr Usman. He later fled to the United State only to return five days ago.

Mr Azare announced his freedom on his Facebook page yesterday, saying: “This is to inform you that I have been released on bail based on self-recognition. We give glory to God Almighty, Master of the Day of Judgment.

“Words cannot express my appreciation to friends, family and thousands of supporters and admirers who took the campaign for my release to a level I never expected. I’m now safely reunited ‎with my family.”