2019 Elections: US Ambassador Warns Nigerian Politicians Not To Use Offensive Words That Would Impede Democracy

An Ambassador to Nigeria has urged politicians participating in the upcoming elections not to obstruct democracy with their words.

“Elections are only one part of the democratic process. The words and the actions that happen in these final days of the campaign and all the work of government afterwards, are as important to democracy as the elections themselves,” Stuart Symington, the US ambassador to Nigeria said in a video obtained by DENISAURUS News.

The US Ambassador who advocates for citizen rights in the same video, said: “The elections are a remarkable opportunity for all Nigerians to come together and for every citizen to express their will. What the United States hopes to see in your elections this year 2019 are elections that are free, fair, credible and, above all, transparent.

“In this process, I know one thing: it is absolutely important for the citizens of Nigeria to personally take part, beginning right now by knowing what your rights are.

“On election day, you won’t have an effect unless you vote. It’s terribly important that you work together to make sure that your votes are counted.

“You know, as we get ready for your elections, one of the most important things is that there is a level playing field, meaning that no officials, no security forces, no electoral officials, no politicians seek to influence you in a way that is not consistent with the Nigerian law.”

The statement was made shortly after the Governor of Kaduna, Nasir El-Ruai stated that any foreign powers that intervene in the 2019 elections would return in body bags.

“Those that are calling for anyone to come and intervene in Nigeria, we are waiting for the person that would come and intervene, they would go back in body bags,” Governor El-Rufai said at a NTA Live programme.

Many have criticised the Governor, who himself monitored Ghana’s Presidential election as an observer in 2016.

Nigerians will head to the polls to elect a new President or decided to keep President Muhammau Buhari in office on February 16.

There has been apprehension across the 36 states as campaign of the two major parties – All Progressives Congress and Peoples Democratic Party, winds up.

So far, Mr Symingtons and his UK counterpart have warned that anyone who poses as a threat to the peace of the elections in Nigeria would be banned from ever visiting their countries again. 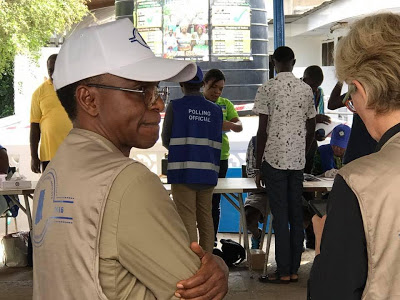