Lawmakers today urged the Inspector General of Police to relieve the Force’s Public Relations Officer, Jimoh Moshood of his job, following a derogatory statement made on TV against the Governor of Benue.

The Chief Superintendent of Police, who appeared on Channels TV with the Chief Press Secretary to Benue State Governor, Terver Akase on February 6, 2018, said Governor Samuel Ortom was “a drowning man” and should resign.

A motion sponsored by Hon. Mark Terseer Gbillah, condemned Mr Moshood, saying his statement was unprofessional and he should resign.

The Benue state caucus of the House of Representatives issued a further statement stating that the PRO’s derogatory statement is an indication of the partisanship of the Nigerian Police Force.

In the statement released this morning, they want the “Inspector General of Police to provide an unreserved apology to the Benue State Governor over the derogatory statements of the Police PRO and relieve the PRO of that position immediately.”

They expressed concerns “about the public disparaging of a duly elected representative of an institution of government by the Police PRO who is the spokesperson of an agency saddled with the responsibility of securing the lives and property of all Nigerians in line with the primary role of government and enforcing the laws of the federation in a disabused an unbiased manner and the implications of the alleged statements made by the Inspector General of Police which the Police PRO did not refute.”

The group mandates that “the constituted House committee on the recent killings and insecurity in the Nation to investigate the alleged statements made by the Inspector General of Police and the implications to his ability to superintend the resolution of the killings in Benue and other parts of the country if found to be true.” 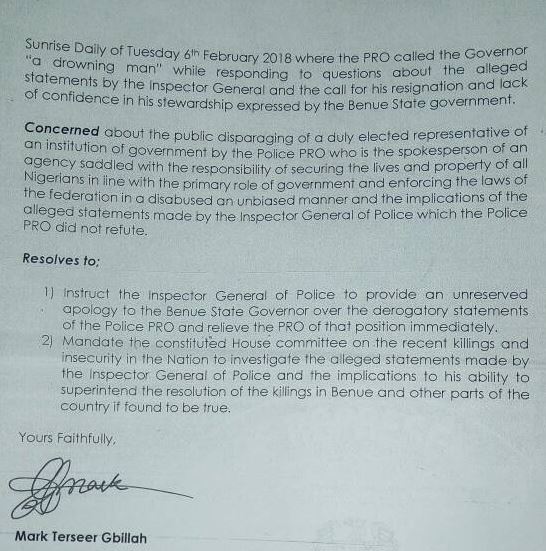