A whistle blower at the Economic and Financial Crimes Commission, EFCC has just flagged up a 300 Million Naira fraud at a Financial Intelligence Unit, domiciled in the anti-graft agency.

The source who is familiar with the situation accused Ibrahim Mustafa Magu, the acting chairman of the EFCC of conspiring with Francis Usani, the director of NFIU of carrying out what is being described as the biggest cover up in the history of the agency.

The anti-graft staff, had also exclusively alerted DENISAURUS News to Nigeria’s suspension from a crucial financial intelligence server this year.

The latest expose reveals an alarming rate of information on how Mr Magu, was covering huge fraud committed at the controversial Nigerian Financial Intelligence Unit, NFIU.

In the report, the whistle blower said that N 300 million was released “to the NFIU as a way to strengthen the FIU and enable them to prepare for Financial Action Task Force, FATF evaluation in 2017.”

DENISAURUS News learnt that the money “which is considered more than enough to run FIU for three years” was squandered by Mr Magu, the current EFCC chairman, the NFIU director Mr Usani, Mustapha Abdul Rahman, Hadiza Gamawa among other staff of the NFIU.

According to the insider, “the fraud included the procurement of houses and items without authorisation, approval for expenditure in the NFIU without aligning with procurement procedures, procurement of things for personal use by staff of NFIU and chairman of EFCC.”

It was a “blatant disregard for EFCC procurement procedure, payment for jamboree travel for EFCC officials without authorisation. 300 million naira, was mismanaged by officers who are all below level 14 but nobody has been prosecuted. Instead, Mr Magu being an accomplice has posted some of the culprit to different offices.” the source added.

However, Mr Usani, Mr Abdul Rahman and Mrs Gamawa claimed to have used the money to prepare a report. Yet, the source asked “if any report could cost that amount?”

The three hundred million Naira was domiciled at Zenith Bank Nigeria with the Account Number – 621160047 – Name on account AML/CFT which translates to Anti-Money Laundering and Combating the Financing of Terrorism.

Our source, who wished not to be named for fear of reprisal, claimed that a report of the fraud was submitted to the VP’s office and PACAC which prompted Mr Magu, whose nomination was rejected by the Senate due to an indicting report by the Department of State Service to start a white wash internal investigation.

Those investigated where later handed the report from the investigation, which is a huge blow to the effort of the government fight against corruption.

DENISAURUS News can also reveal that the EFCC and FIU refused to adhere to the TSA requirement. Critics see the move as “a blatant disregard to government policy / directive.”

While explaining to the reporter, the source said that the reason the fraud has been undetected is because there is no EFCC legally constituted board.

Although the members of the board have been cleared, they are yet to assume office, hence the Borno born officer has been acting illegally by taken all the decisions on his own.

It was not possible to reach Mr Usani on his telephone and the EFCC spokesman did not respond to a request for comment on Monday.

DENISAURUS News  reporters investigated the NFIU department which has been used to obtain secured information illegally. This website in May broke the news of the suspension from Egmont.

In his desperate bid for confirmation, Mr Magu has used highly sensitive information under the NFIU to blackmail people.

Mr Magu’s EFCC has also failed to share financial intelligence with other law enforcement agencies as required by the international standard agency law.

Though, the NFIU has always been under the control of the EFCC, Egmont group has now raised concern that the financial intelligence dissemination is now subject to manipulation and lacks credibility.

The 24th plenary of the Egmont group was held in Macao this year. Failure on the part of the FIU to address concerns regarding the protection of confidential information” means the NFIU, Nigeria “is now excluded from all Egmont Group events and activities.

“The Egmont Group expressed its hope that the Nigerian authority will address these concerns to enable the Egmont Group to lift the suspension as soon as possible.”

To reverse the suspension, the Senate has passed a law to make the NFIU independent as required by the financial body. 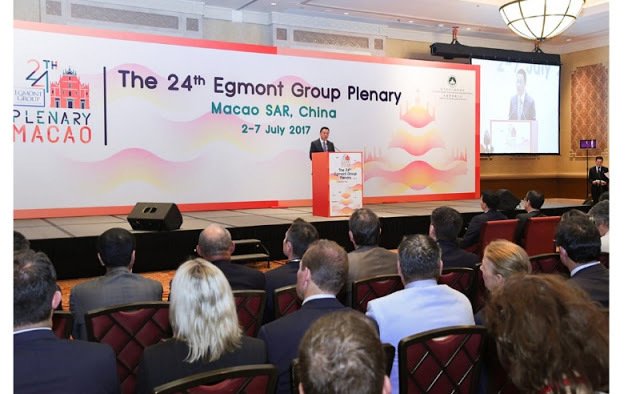 The whistle blower at the EFCC told reporters from DENISAURUS News that “the rot at the NFIU is overwhelming.

“The chairman handpicks the Director of the NFIU. It is certainly not autonomous. In fact, the director of the NFIU once came to the bad foot of Mr Magu. He was about to get rid of him, but for a piece that came out in this paper.”

READ ALSO : Nigeria “Completely Shut Down” From Accessing Financial Intelligence From Around The World Due To Sabotage By Magu Of EFCC (EXCLUSIVE)