The meeting, which was the mid-year gathering of the party faithful across the United Kingdom, was witnessed by scores of members who also reiterated their support for Nigeria’s governing party, APC.

The members of the All Progressives Congress, United Kingdom chapter converged on Saturday to proffer strategies on how to move Nigeria forward.

The meeting, which was the mid-year gathering of the party faithful across the United Kingdom, was witnessed by scores of members who also reiterated their support for Nigeria’s governing party, APC. At the meeting held at the prestigious Holiday Inn Hotel in London’s North Greenwich, a chieftain of the party in the United Kingdom, Hon. Ade Omole, reeled out the achievements of the party chapter in the last year, one of which is the merger of all APC groups in the UK to form one indivisible force with the aim of supporting the APC-led Federal Government in these challenging times.

Omole posited that the recession is now over, jobs are being brought back, decaying infrastructure are also being regenerated one after the other, all of which show the capability of the government to make Nigeria great again. He advised that party faithful should consider their membership of APC as an opportunity to contribute their quota to the development of their motherland. Also, other party chieftains echoed Omole’s position.

They lauded APC UK’s steadfastness in ensuring the growth of the party and massive deployment of new age technology in disseminating information to Nigerians, both during the electioneering campaign in 2015 and beyond. On his own part, a former Chairman of the Action Congress of Nigeria, Dr. Ibrahim Emokpaire, who is presently an APC UK chieftain, urged members to see their membership of the party as a call to serve the nation and as part of the sacrifice they have to pay for their country.

Emokpaire praised President Muhammadu Buhari’s leadership of the nation, saying the country could have been in a worse situation if Nigerians had not voted out the former administration.

He also wished Buhari speedy recovery and a return to the saddle to continue to steer the ship of the nation towards the promise land. Another chieftain, Hon. J. K. Adebola, a legal practitioner, expressed satisfaction on how the once polarised party in the UK was able to come together as one. Adebola said: “Our coming together as one united house in the United Kingdom means a lot.

“Despite issues of the past and circumstances that kept the party chapter bound and rudderless, we have managed to surmount all the challenges and with strong resolve and determination we are able to sit on a round table and iron out our differences.

“Today we are talking of a united, strong and indivisible APC UK.

“This is no doubt a new height. “APC UK is unwavering in our support for the government in its fight against corruption and the giant strides it has made and continues to make in the decimation of insurgency in the country.

“APC UK is currently drafting a policy blueprint on how to achieve a stable and sustainable economy, which will in turn ensure dividends of democracy to all Nigerians.

“As 2019 beckons on us, it is incumbent on all progressive Nigerians to rally round our government in its quest to rejuvenate our hitherto deplorable infrastructures and, above all, ensuring that APC becomes victorious again come 2019. “I want to implore every one of us to put the Country and the party first in all our dealings; we should no longer allow personal interests to override the collective and overall interest of the Country.

“We should see ourselves as members of one family and work together to build a bigger, stronger and united All Progressives Congress UK.”

Other party stalwarts who attended the meeting were Hon. Kola Adewale, Hon. Seun Baiyewu, Hon. Oladapo Habeeb, Hon. Abdul Kuku, Adenike Lucas and Jacob Ogunseye. At the height of the mid-year meeting, which was attended by representatives of APC Holland, APC South Africa and APC France, was the paper presentation by Prof. Adebisi Adewole, a lecturer and Deputy Director, Centre for African Research on Enterprise and Economic Development, University of the West of Scotland, titled: “Education in Nigeria and International Competitiveness.” Adewole spoke on the deplorable condition of Nigeria’s educational system.

He associated the current low quality of education in Nigeria to accumulated bad governance and urged the APC-led government to declare a state of emergency on education to allow a complete overhaul and repair of the sector. He urged the government to adopt the United Nations recommendation of investment of 6 per cent of the country’s GDP on education and suggested that any padding of education budget should be a crime against the Nation. At the meeting, several issues regarding the development of Nigeria were raised, among which are the economic and political situations, with suggestions made on how to overcome it all and ensure dividends of democracy to all through egalitarian governance.

The APC UK has set up various committees to work with their Nigeria-based counterparts in helping to foster sustainable growth for our economy. 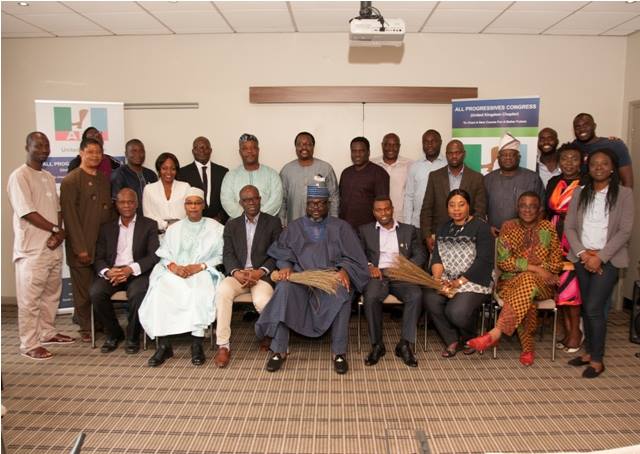