Omoyele Sowore, the publisher of Sahara Reporters, is said to be running helter-skelter after an High Court Judge in Ilorin freezed the bank account of the US based online newspaper, over false stories published against the Senate President.

This media house, the first to report Nigeria’s  suspension from the Egmont group server, a world financial intelligence body, has given a detailed account of how Mr Sowore was working in connivance with the rejected Chairman of the Economic and Financial Crimes Commission, Ibrahim Mustafa Magu.

Mr Magu, whose nomination as the 4th chairman of the anti-graft agency was rejected by the Senate following an indicting report by the Department of State Services, DSS, was accused of trying to tarnish the reputation of supposed enemies by leaking distorted information from the country’s Financial Intelligence Unit to media allies such as Sahara Reporters.

Mr Magu, we were reliably informed refused to discuss with his supervisory boss, Abubakar Malami, SAN about the suspension  which we published in May.

READ ALSO: WORLD EXCLUSIVE: Nigeria “Completely Shut Down” From Accessing Financial Intelligence From Around The World Due To Sabotage By Magu Of EFCC

Then, he denied the shut down and instead claimed that the editor of this website, Adenike Lucas was being paid to publish the story. 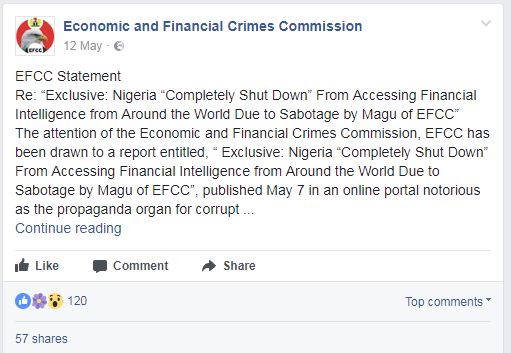 However, Miss Lucas says she has been vindicated because the story on Nigeria’s removal from the American world financial server has since been verified as the truth.

Former Governor of Kwara State, Senator Saraki and a lawmaker from Kogi-West, Dino Melaye were often targeted by Sahara Reporters because of their stance against the corrupt Mr Magu.

Justice Oyinloye had also requested that the damaging stories be removed within three days, yet Sahara Reporters went and published other unverified news against Senator Saraki.

Senator Saraki whose representative, Babatunde Olomu approached the Court in a suit marked KWS/23/2017/ was awarded the sum of “N1 billion as general and aggravated damage for libelous words falsely, maliciously and recklessly published by the defendants.”

He said: “The sum of N 1 billion as general and aggravated damages for libelous word falsely, maliciously and recklessly published by the defendants of and concerning the claimant in the online issue of Sahara Reporters of December 1, 2015.”

Sahara Reporters failed to attend court hearing or put up a defence despite the service of summons on them.

Document seen by DENISAURUS News ( DOC-20170704-WA000 ) shows that Justice Oyinloye has granted a garnishing order for the recuperation of the N4 Billion from Mr Sowore.

Mr Sowore is yet to release a statement on the recent decision taken by the Judge over his business accounts.