President Muhammadu Buhari set up a three-man panel, which includes his deputy after large amount were discovered in the plum apartment in Ikoyi, by Mr Magu, the acting chairman of the Economic and Financial Crimes Commission, EFCC.

Corrupt police officer, Mr Magu, who enjoys the support of Prof Osinbajo, despite an indicting report by the Department of State Services, DSS, was informed that the money belonged to the National Intelligence Agency, NIA, before he began the operation to recovery process.

The Vice President who is holding forth in the absence of President Buhari, requested for details on the NIA $43M discovery. Shamefully, the inarticulate acting chairman could not provide any answers, DENISAURUS News has learned.

Following Mr Magu’s inability to substantiate and articulate himself, during his explanation to Professor Osinbajo, the core staff was asked to provide briefing on the issue.

Prof Osinbajo asked if the staff was an “EFCC Core Operative” or a “Seconded Policeman”, and the Operative affirmed he was a Core Staff. Thereby making the Vice President to exclaimed, “If we have people like you among core operatives, why then do we need to Second Policemen to the EFCC”, our Presidency source revealed.

According to Friends of Mr Magu, this issue is giving him sleepless night, which led to his victimisation of the Core Staff.

The Anti-graft agency’s boss, does not want to hear that his subordinate can do better than him. “What an arrogant and power drunken leader,” argued another source.

Information privy to DENISAURUS News revealed that, the said Senior Core EFCC Operative, has been removed and his Team which investigated the NIA $43M disbanded. Whereas, the Core Staff was made to go work under his mate, receiving orders, just to demoralise him to resign, as has been done by Mr Magu to other Management Staff who resigned in past.

READ ALSO : Where Lies The Hope Of Career Progression For Core Staff

The grouse of Magu with the EFCC Core Operative is that he was too vocal and self-articulate, when he was requested to brief the VP on his leadership during the discovery of the NIA $43M Ikoyi Cash.

Following a show down with the Legislatives, the Presidency has approached the Judiciary over Mr Magu’s continued stay in office.

Luminary advocates say Mr Magu’s failure to get confirmation from the Senate is tantanmount to a sack.

The EFCC Act 2004, created by parliament, states he must be confirmed to be Chief Executive of the anti-graft agency.

The Constitution gives the Senate the power to confirm and on March 15, they voted against the nomination of Mr Magu.

Mr Magu’s critic say he should vacate his office because, after attending a screening at the Senate, he was rejected.

The poor screening described as a job interview by a senior lawmaker,  and the DSS report means Mr Magu has failed to become the 4th substantive chairman of the anti-graft agency. A Top Government official, has said Mr Magu will remain in office.

However, a social media user, Somoto Onuchukwu thinks even the Executive no longer want Mr Magu but they are not sure of how to tell him to go.

Meanwhile, Sources have exposed how Mr Magu is trying to put friends in key position should in case he is removed, the Director of Operation would take over.

A source confirmed that while lawmakers were trying to fix a damage caused by the Borno born police, Mr Magu was scheming his own plans by setting up a fraudulent committee at the Financial Intelligence Unit.

The EFCC acting boss inaugurated the sham Committee with the supposed attempt to reposition the Nigerian Financial Intelligence Unit, NFIU.

DENISAURUS News was the only media to report in May, that Nigeria’s FIU had been suspended from the Egmont group.

Then, Mr Magu denied the claim and stated in a press release published by the Commission’s spokesperson, that the editor of this news site was a sponsored agent.

Staff bolstered by the final admittance of the shut down, told this media house that Mr Magu “refused to do anything about the issue in May, but, now that the Senate is proposing solutions, he wants to act like he is also doing something with this corrupt panel.”

DENISUAURS News will provide more information on the committee.

Mr Magu removed the Director of Legal, Chile Okoroma and replaced him with another Director with the hope that a fake legal advice would be generated, to indict the “Whistle Blowers” whom he (Mr Magu) had suspended since 2015, for exposing his predecessor, Ibrahim Lamorde and other seconded policemen at the anti-graft agency. 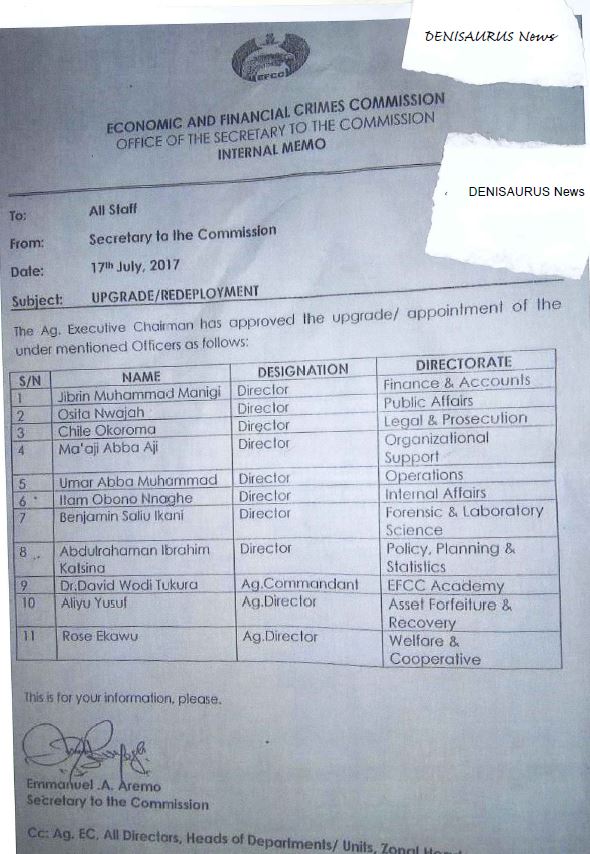 Unfortunately, DENISAURUS News gathered that all the legal advice so far given to the “deceitful” and “crafty” anti-graft boss, exonerated the internal EFCC whistle blowers.

In a nutshell, DENISAURUS News has come to terms and concluded from an extended clandestine investigation on Mr Magu, that the Anti-graft agency’s boss will always stop at nothing, to bring down any EFCC core management staff who happens to have “competence edge” above him. Thereby subjecting the staff members to victimisation, in order to demoralize them into resignation.

Staff members at the EFCC, have in the past accused their boss of several infractions, ranging from victimisation, bullying, blackmails and other atrocities.

The DSS, have corroborated and equally furnished detailed indicting report on Mr Magu, which eventually led to his rejection by the NASS Senate in March 2017.

However, EFCC staff who have spoken to reporters of this website for months, say there is no “concrete reasons why the Prof Yemi Osinbajo would continue to shield all these impunity and corrupt acts of the anti-graft agency’s boss.”

The editor of this news site, Adenike Lucas, warned that Mr Magu would become an embarrassment to the government.

Critics say that the suspension from the crucial world financial server is an example of how Mr Magu has embarrassed the country.

These are the issues raised by DENISAURUS News in the past, which warning on its embarrassment and escalation would affect the government of President Muhammadu Buhari, PMB.

READ ALSO : Why Is The EFCC Acting Chair, Magu Scared Of His Most Senior Core Managerial Operative?

Wilson Uwajuren, the spokesperson for the EFCC did not reply to a request for comment.