Senator Dino Melaye is expected to expose “the root of corruption” in an autobiography set to hit many bookshelves in a few weeks’ time.

The outspoken senator who was elected in 2015 to represent the people of Kogi West in the upper chamber takes on the issue of corruption in the book titled: Antidotes For Corruption: The Nigeria Story, and dissects it.

President Muhammadu Buhari promised to tackle corruption during his election campaign. The President said then that “if we don’t kill corruption, corruption will kill us.”

Lawmakers such as Senator Melaye are bent on reducing corruption to the barest minimum.

In his autobiography, the 43-year-old former student of Ahmadu Bello University, ABU Zaria who received the award of senator of the year in 2016 “makes suggestions on ways whereby the cankerworm known as corruption, can be reduced and even wiped out completely from our lifestyles.”

According to celebrity and lifestyle journalist Paul Ukpabio, “there are signs that the book will be an instant success, as commentaries from a few of his (Senator Melaye’s) political colleagues and business associates who were privileged to see the manuscript, speak well of the detailed research, that Dino meticulously put into the production.”

Senator Dino Melaye, the founder and Executive Secretary of Anti-Corruption Network, does not talk about politics alone.

He gives an interesting account of his miraculous birth and even tells the reader of “why he saw the need to create a positive change. How he created a campaign, an anti-corruption slogan Imolede – meaning ‘light has come’ with a corresponding response such as okunkun parada! Which means – ‘darkness disappears’.

“And more importantly, how this slogan and its response slogan both became popular and virile and resulted in an electoral revolutionary chant that was able to overcome the powers and obstacles of godfathers in his election area and allow him to win the primaries of the party where he anchored his ambition.” 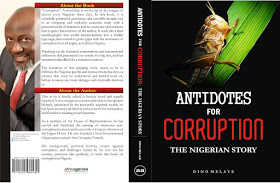