Senior lawmakers have called for the immediate suspension and prosecution of Engineer Babachir Lawal, the Secretary to the Government of the Federation, SGF, over alleged breach of Nigeria’s law in handling contracts awarded by the Presidential Initiatives for the North East, PINE.

A committee investigating the matter led by Senator Shehu Sani indicted the SGF of allegedly benefiting from the funds meant for alleviating the sufferings of the Internally Displaced People in the North East.

An Interim Report of The Senate’s Ad-Hoc Committee on Mounting Humanitarian Crisis in #NorthEast found that Engr. Lawal owned a company, Global Vision Ltd incorporated in 1990 with RC Number 159855 at the Cooperate Affairs Commission in Abuja to carry out ICT services, was awarded a government contract – some of which was not executed.

According to the report,  Engr. Lawal, a signatory to Global Vision Ltd, was awarded consultancy contracts of over N200 million to clear ‘invasive plant specie’ in Yobe State.

Engr. Lawal resigned the directorship of the company in 2016, after the execution of the contract. He remains a signatory to the account despite assuming the role of SGF in 2015.

Senator Dino Melaye, the rep member for Kogi-West said “it was embarrassing” a “gross abuse of office,” adding that “Babachir Lawal is exhibiting anti-Buhari tendencies,” and called for his immediate prosecution.

Senator Melaye, one of the most vocal lawmaker in the Senate said it was a “wholly report,” and the lie of the SGF had “expired.”

The rep member for Lagos West said “Just this morning when they were passing the document round that we the people of this committee should sign, I could vividly remember my own very humble self and Senator Abdullahi where saying, if there are anything in this document that we are not in support of, we will stand up in this chamber  and condemn it openly.”

He also recommended for the prosecution of Engr. Lawal “without no further delay.”

“I want to call on this Senate that we abide by the report of this Committee and also implement it to the latter, without no further delay.” 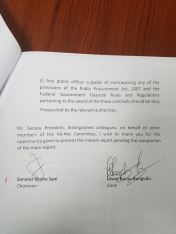