Former President of Nigeria, Goodluck Ebele Jonathan has given a lecture at the prestigious Oxford University.

Dr Jonathan, the first incumbent Nigeria president to ever lose an election spoke about youth entrepreneurship.

Through his official twitter account  @GEJonathan announced that he had “arrived at the Oxford Union where I was received by Union President Noah Lachs and several students. Looking forward to our exchange tonight.”

The 59 year-old, who first served as Commander in Chief of the Armed Forces of Nigeria, following the death of Alhaji Umaru Musa Yar’Adua in 2010 used  the platform to discuss his tenure.

“My Administration came up with various programs to encourage young entrepreneurs,” he told the audience.

The former Governor of Bayelsa State said “under my watch, Nigeria was projected by CNN Money to be the third fastest growing economy in the world for the year 2015.”

“While serving as President of Nigeria, I worked for the next generation and not for the next elections. I have no regrets for what I did.”

He added that “Nigeria was rated as the largest economy in Africa and the 23rd in the world by the World Bank and the IMF, with a GDP above US$570 billion”

But this statement has been criticised by young people on social media who see the former President’s regime as the most corrupt era in Nigeria’s history.

Dr Jonathan’s wife, Dame Patience is currently being investigated over 15 million dollar linked to her account.

Many of his cabinet minister have also  been indicted in a 2.1 billion dollars arms deal involving the former National Security Adviser, Col. Sambo Dasuki. 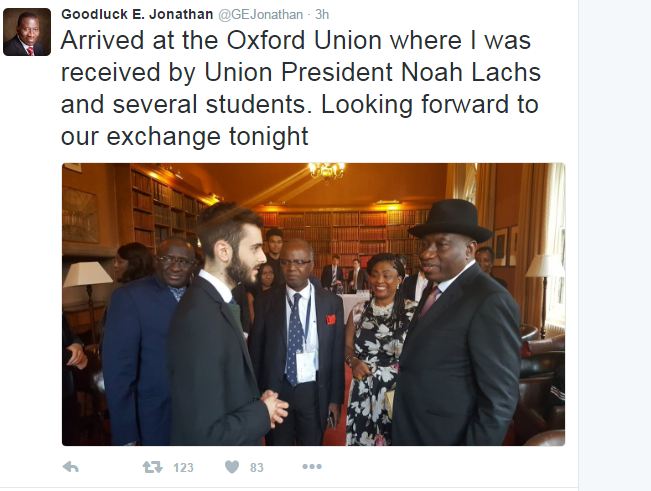 SEE BELOW for reactions to Dr Jonathan’s lecture at Oxford University.

Others claimed he protected corrupt official and is now trying to re-write history. 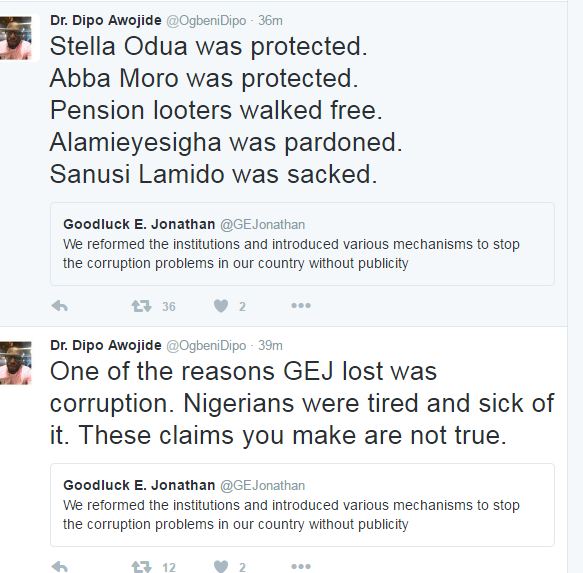