President Buhari hopes his party, the All Progressives Congress will retain the South West state hence  his visit is to encourage the people to vote for Mr Obaseki in the election scheduled to take place on Saturday, 10 September.

Arriving in the Benin airport at twenty minutes past ten in the morning, the Commander-in-Chief of the Nigerian armed forces, led other notable party members to visit the crown prince and the Ediaken of Uselu, Eheneden Erediauwa, at his palace at Uselu.

A few APC governors such as  Akinwunmi Ambode of Lagos and Bindo Jibrilla of Adamawa are also present at the grand rally to mark off the end of the campaigns in the state. 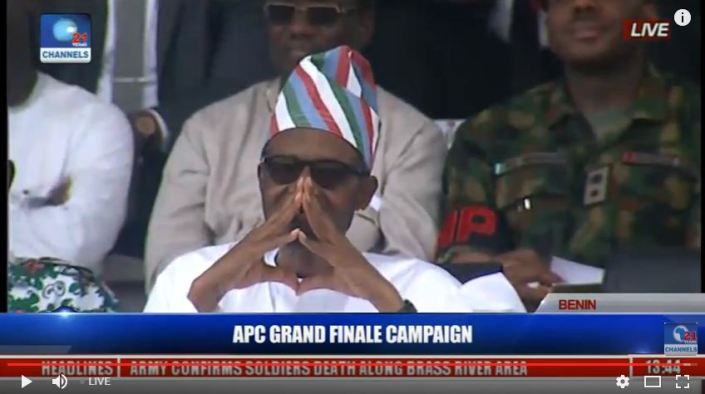 Despite it being a weekday, thousands of people filled the rally ground to welcome the President.

President Buhari smiled as Comrade Adams Oshiomhole spoke to the crowd about the successes achieved during his tenure.

Taking to the podium to address the people, Mr Buhari  said he was pleased to be invited to the state.  He thanked the incumbent, Governor Oshiomhole for a doing a good job.

“We have no other nation like Nigeria,” he said “I congratulate Mr Obaseki, a seasoned person. I assure you and I recommend him to you so you can continue to grow.”