Staff members of the Tertiary Education Trust fund (TETFund) gathered at the entrance of the office this morning, to celebrate the sack of Abdullahi Bichi Baffa.

Mr Baffa, the Executive Secretary of the Tertiary funding Agency, was appointed in 2016, but was removed by President Muhammadu Buhari today, following allegations of political interference in Kano.

The President directed that Mr Baffa be immediately replaced with Suleiman Elias Bogoro.

Mr Bogoro, had previously served in the same office, after he was appointed by President Goodluck Jonathan in 2014. He handed over to Mr Baffa in 2016.

A statement sent to DENISAURUS News confirming the return of Mr Bogoro, stated that Mr Baffa’s sack was with “immediate effect.”

“The Federal Government has approved the re-instatement of Professor Suleiman Elias Bogoro as the Executive Secretary of the Tertiary Education Trust Fund (TETFUND).”

He is to work with the “same terms and conditions as it were in his previous appointment and as stipulated in the TETFUND staff conditions of service.” 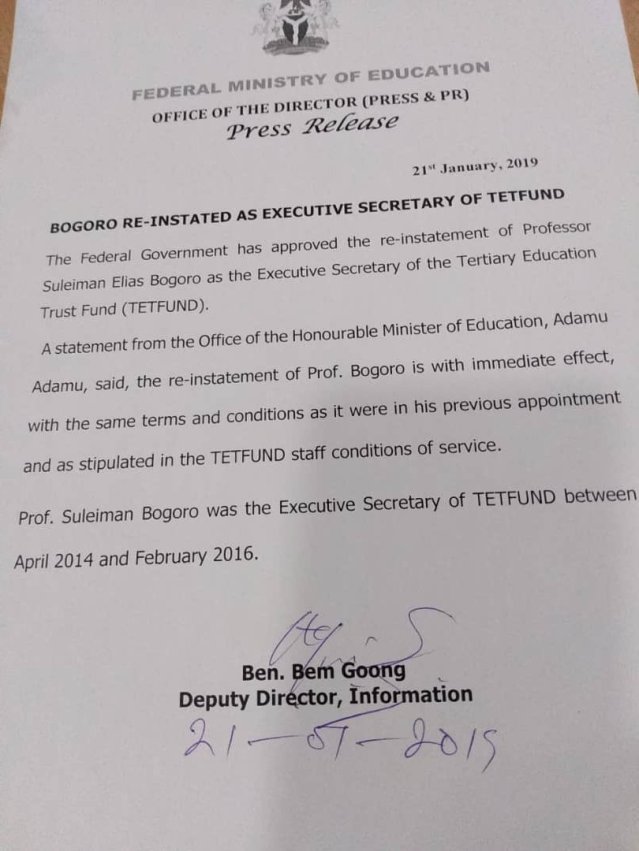