All thanks to the Senate President, Bukola Saraki, who on Thursday reached out to senior members of the House of Rep to ensure that a crucial bill is passed before the world financial intelligence unit holds its next plenary in Argentina next week.

DENISAURUS News exclusively reported in May 2017, Nigeria’s suspension from the Egmont Group, which shares Financial Intelligence with countries which includes UK, US, Afghanistan and Sudan.

WORLD EXCLUSIVE: NIGERIA “COMPLETELY SHUT DOWN” FROM ACCESSING FINANCIAL INTELLIGENCE FROM AROUND THE WORLD DUE TO SABOTAGE BY MAGU OF EFCC

The suspension was caused by the acting chairman of the Economic and Financial Crimes Commission, EFCC, Ibrahim Mustafa Magu.

Then, a source at the EFCC said that the “corrupt” anti-graft boss was exposing privileged information gathered from Nigeria’s Financial Intelligence Unit (NFIU), to those who should not be allowed access.”

The NFIU whose director is appointed by the EFCC Chair, is often seen as a department within the EFCC but it is not meant to be so.

The Nigerian Financial Intelligence Agency, NFIA Bill, which looks to make the NFIU independent, as required by Egmont Group, was passed by the Senate in July 2017.

But rather than adopt the bill, House of Representatives chairman on anti-corruption, Kayode Oladele, drafted a totally new bill which negates the requirements of the world Financial Intelligence Units.

Hon Oladele, a former EFCC staff wanted the NFIU to remain at the anti-graft agency, despite the recommendation from the Egmont Group for it to be made independent with an autonomous staffing structure.

In an attempt to diffuse the situation, Senator Saraki held a discussion with the Speaker, Yakubu Dogara.

Following my meeting on Thursday with Speaker @YakubDogara, the Chairman @NGRSenate Committee on Anti-Corruption and @HouseNGR Chairman on Financial Crimes, the Conference Committee meeting for the NFIU Bill will hold tomorrow and the Report presented in both Chambers on Tuesday.

It was then decided that to prevent Nigeria’s expulsion from the a united body of 152 Financial Intelligence Units, a Conference Committee meeting was to be set up and the report from the meeting presented in parliament.

Today, both chambers of the National Assembly laid the Conference Committee Report of the Bill in order to harmonise it.

Since it has now been passed in both chambers, President Muhammadu Buhari is expected to give his Presidential assent to make the bill into law.

Hopefully, that should be before March 11th, when the group will hold its next plenary in Buenos Aires, Argentina 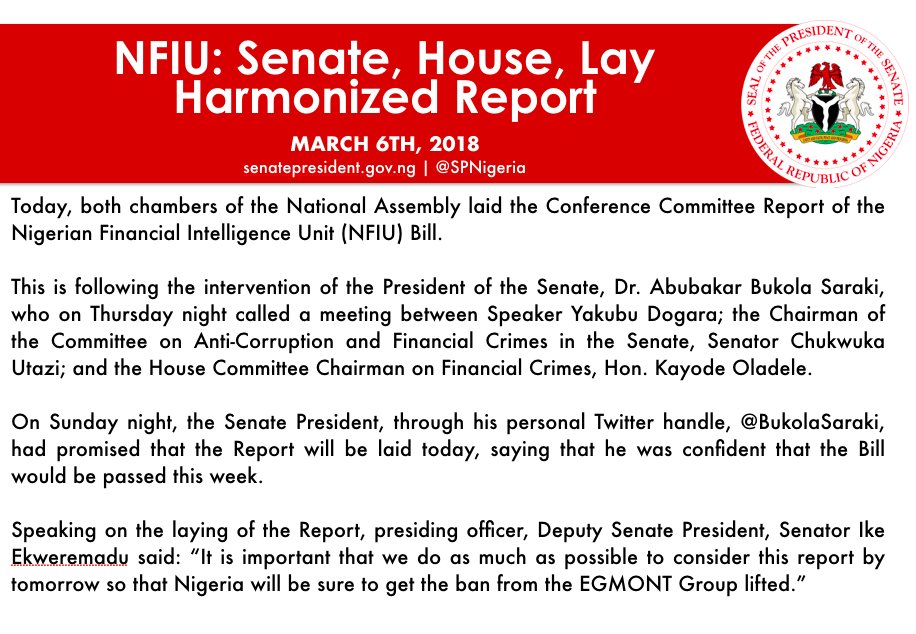