Oluwarotimi Akeredolu, SAN  was unable to attend a Governorship hustings organised by Channels TV because he was out campaigning in an area where they have no television set.

In a statement, Mr Akeredolu’s campaign communications secretary explained that the candidate of the All Progressives Congress in the state election, could not attend the debate due to “hectic campaign schedules.”

Mr Akeredolu who stood on the platform of the defunct Action Congress of Nigeria took part in several TV debate in 2012.

The former president of the Nigerian Bar Association, NBA became the flag bearer for the APC – which is an amalgamation of the the Action Congress of Nigeria (ACN), the Congress for Progressive Change (CPC), the All Nigeria Peoples Party (ANPP) – and a faction of the All Progressives Grand Alliance (APGA)- after the party held its primaries in September.

Kunle Adebayo said the debate came “at a time when our grassroots rallies are at their peaks.”

Mr Adebayo’s statement which was posted on the official APC Nigeria twitter handle said: “As we write this, Mr Akeredolu is tucked in the deep Riverine communities of Ilaje Local government most of which have no access to electricity to watch Television.”

“In view of the demand of this hectic campaign schedule, we therefore regret our inability to honour Channel TV’s call for debate within the remaining time.” 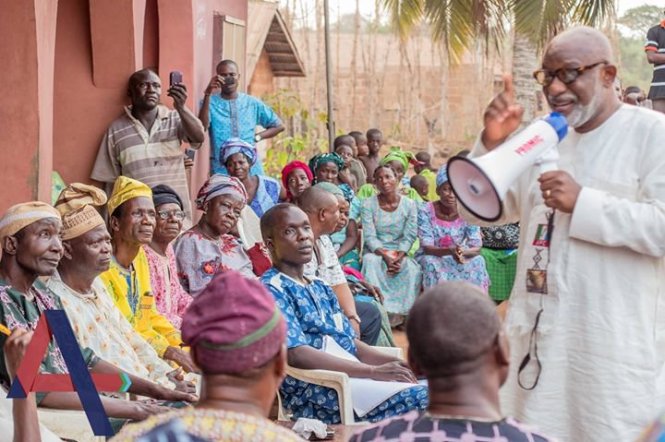 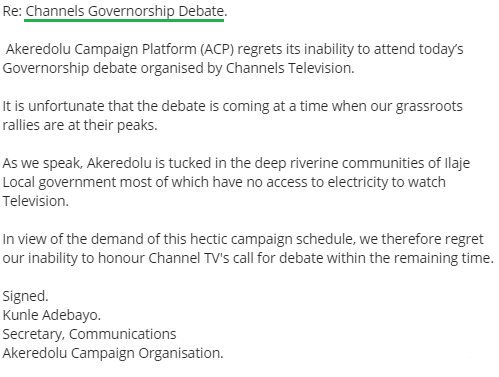